First Lady Melania Trump, 49, and Second Lady Karen Pence, 62, both traveled to South Carolina to learn about their preparedness in terms of military emergency and humanitarian efforts. Dressed for the occasion, the U.S. First Lady got her inspiration from the American troops with her Coach trench coat.

According to Daily mail, the iconic dress of the First Lady is inspired by the American troops. During the visit, she was spotted wearing an army green trench coat over a brown leather skirt. On the other hand, the Second lady wore a brown suit with a bow at the waist of her blazer. 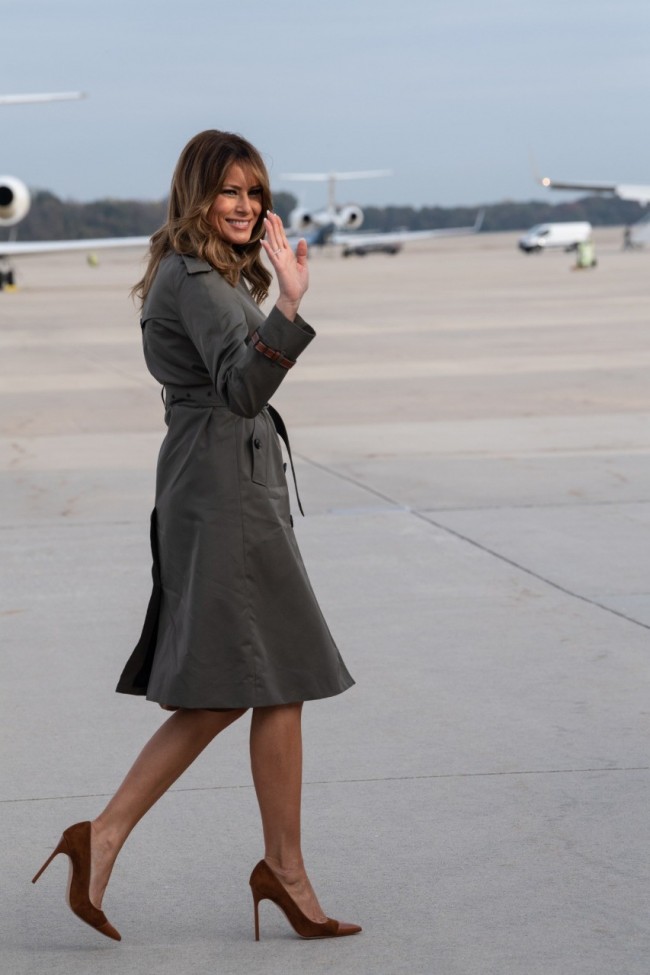 Upon their arrival, they visited Lambs Elementary school and joined the fifth-graders who are participating in the Red Cross's Pillowcase Project, as reported by an article published in Breitbart. The aim of the program is to prepare the children mentally and physically from natural disasters such as hurricane. And later in the day, Melania and Karen joined and met the military at Joint Base Charleston in North Charleston for an emergency preparedness where Melania also delivered her remarks to the troops and the family.

But what drew much attention from the crowd was the fashion of the First Lady, as she wore a 1970s inspired army green trench coat by Coach which retails at $350. Melania trump paired her coat with her favorite pairs of Manolo Blahnik suede-leather stilettos. These stilettos have been the First Lady's all-time favorite, as she already wore the heels four times, the most recent being in July during the Western-inspired denim ensemble.

Melania and Karen gave flashlight to the students in Lambs Elementary School as part of their participation in the Red Cross Pillowcase Project. After the Lady found out that one of the students has a sister in the military, she expressed her gratitude by saying thank you. The First Lady also said that she admired what the girls are doing.

In a report in published in Fox News, the First and Second Lady visited South Carolina weeks after the state was hit by Hurricane Dorian. The First Lady appreciated the efforts made by the Lambs Elementary School in preparing their students for different calamities.

In attendance during the visit of Melania and Karen were the officials from the National Oceanic and Atmospheric Administration (NOAA), 841st Battalion, U.S. Coast Guard, Airlift wings, and the 628th Emergency Operations Center.

The event was also participated by other 500 military members with their families. The First Lady took this opportunity to commend the efforts made by the American troops in the recent raid against the Islamic State of Iraq and Syria (ISIS) leader Abu Bakr al-Baghdadi in Syria. Melania also said that the U.S. military has never been stronger than it is now and that U.S. will continue to battle bravely.

Moreover, the First Lady did not forget to mention the efforts and sacrifices made by the American militaries for the nation even if it costs lives. She expressed her gratitude for their families as well for the continuous commitment to ensure the national security of the country.