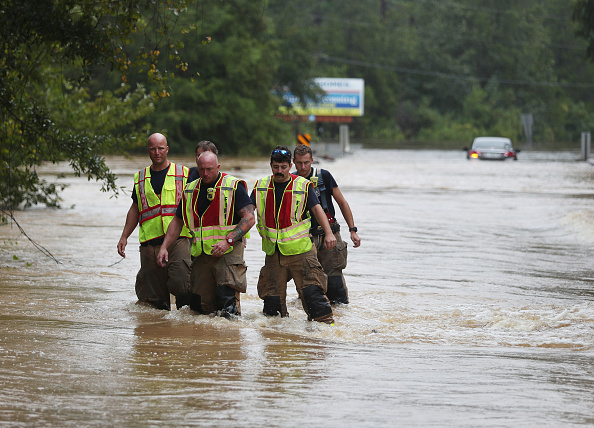 (Photo : by Joe Raedle/Getty Images) Members of the Pace Fire Rescue department wade through a flooded road after Hurricane Sally passed through the area on September 16, 2020 in Pensacola, Florida.

Hurricane Sally has drenched people near the Florida-Alabama border, and rescue is now underway.

According to The Hill, hundreds of people were being pulled out of their damaged homes during rescue operations. Authorities fear there could be more damage brought by Hurricane Sally in the coming days.

CNN reported that Sally unleashed up to 30 inches of rain from Florida Panhandle to Mobile Bay in Alabama. That is four-month worth of rain in four hours.

The National Hurricane Center (NHC) said it would bring "historic and catastrophic flooding" and could threaten even more communities as it moves north.

Sally grew weaker after it made landfall as a Category 2 hurricane on Wednesday morning. It grew weaker into a tropical depression by Wednesday night, said the NHC.

Its sustained winds were down to 35 mph. It was located about 10 miles northwest of Troy, Alabama. It was seen moving northeast at nine miles per hour. But the devastating toll it took could still be seen across many states in the South by nightfall.

There were 377 people in flooded neighborhoods rescued in Escambia County. Jason Rogers, the county's public safety director, confirmed in a news briefing.

Escambia County Sheriff David Morgan noted that it's going to be "a long time" for the county to "come out" of Sally's harsh aftermath. He added that there could still be thousands of evacuations needed.

Submerged homes could be seen in parts of Florida and Alabama. Rivers were also approaching dangerous levels, and curfews were put in place in some counties to keep residents safe.

Debris from destroyed homes and flooded cars were left behind as Sally left, and the water receded. The streets of Pensacola were turned into white-capped rivers early Wednesday.

The National Weather Service (NWS) systems forecast four inches to eight inches of rain in southeast Alabama and central Georgia by Thursday night. Some spots are even expected to reach one foot of rain.

Major flood levels by Thursday are expected to hit at this time, and some of the crests could break records. The NWS said bridges could get submerged, and homes may get flooded.

Morgan estimated thousands of people will still need to flee as waters rise in the coming days.

Residents will have to rely on text messaging to contact family and friends. Lines will remain for cellphone service to let 911 calls pass.

"There are entire communities that we're going to have to evacuate," the sheriff said. "It's going to be a tremendous operation over the next several days."

Half a Million Without Power

NWS declared a flash flood emergency for "severe threat to human life" and "catastrophic damage of a flash flood."

Parts of coastal Alabama and the Florida Panhandle are part of the warning zone, including Gulf Shores and Pensacola.

Power has been out for more than 500,000 residents of Florida and Alabama, said power tracker PowerOutage.us.