Ivanka Trump, the eldest daughter of President Donald Trump, blasted the Washington, D.C. attorney general's office for her deposition on the 2017 inauguration spending that lasted for five hours.

Ivanka believed the length of the inquiry was a "waste of taxpayer dollars," said a report from Newsmax.

The inauguration spending committee was being questioned for allegedly wasting donated money on an overpriced ballroom at the president's D.C. hotel, Ivanka said in an email she posted on Twitter on Thursday.

More than $1 million was spent on booking that ballroom as part of the Trump family's "scheme to 'grossly overpay' for party space," alleged D.C. attorney general Karl Racine. 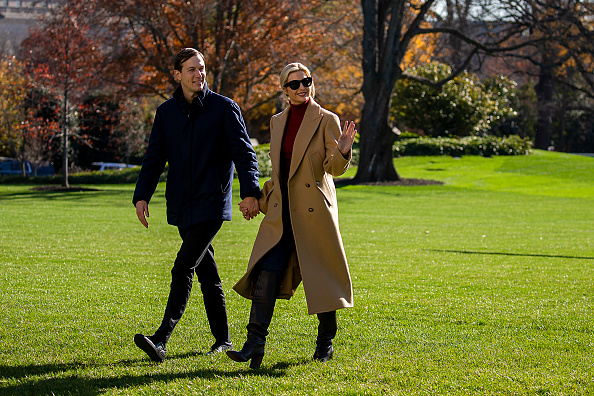 (Photo : Tasos Katopodis/Getty Images) Senior Advisors to the President Jared Kushner and Ivanka Trump walk on the south lawn of the White House on November 29, 2020 in Washington, DC.

Ivanka Trump left her father's company in 2017 and has since worked at the White House as an aide.

Managing the hotel on a day-to-day basis has become a job for his two eldest sons, Donald Jr. and Eric, but Trump is still the known owner of his businesses - including the D.C. hotel, reported Washington Post.

According to Ivanka, she gave the attorney general's office an email from December 2016 giving instructions to charge a "fair market rate" for the event, which she claimed the hotel followed through.

Details not included in her tweet were earlier emails stating the hotel's rates and ones that followed it from top officials questioning the price tags.

These emails were posted by the AG's office online. It was part of Racine's response to Ivanka's complaints about the deposition and the email she attached to her tweet.

Ivanka argued that the lawsuit was simply a "politically motivated demonstration of vindictiveness."

CNBC said that with the presidential daughter's complaints, she omitted the $3.6 million fears that the family gained profit from the non-profit set up the inauguration.

Presidential Inauguration in Their Own Hotel is 'Unprecedented'

Ivanka failed to mention that the email she tweeted was made after being warned by a top official of the committee on the "quite high" price for food and beverages during inauguration week.

Some reports said that an incoming president having his inaugural committee buy services and goods from their own business was also unprecedented in history.

"District law requires nonprofits to use their funds for their stated public purpose, not to benefit private individuals or companies," Racine said.

So the goal of the probe was to recover any non-profit funds that were "improperly funneled directly to the Trump family business."

"It's very simple: They broke the law. That's why we sued," Racine continued.

The inaugural spending committee raised an unprecedented $107 million to host events celebrating the president's 2016 victory, but his team had drawn continued scrutiny.

So far, the AG's office said the probe showed a difference in charges given to a group hosting a prayer breakfast for a rate of $5,000, and the inauguration committee, which later in the day paid $175,000 for the same venue.

In a statement, Trump Organization's Alan Garten said: "Ms. Trump's only involvement was connecting the parties and instructing the hotel."

The ABC News reported that the probe was announced by Racine last January as he said he was suing the Trump Inaugural Committee, The Trump Organization, and the Trump International Hotel "for blatantly and unlawfully abusing nonprofit funds."

As part of the suit, Ivanka's husband and fellow White House advisor, Jared Kushner, was also deposed by the lawyers from the AG's office on Tuesday.

© 2021 Latin Post. All rights reserved. Do not reproduce without permission.
Most Popular
Our Picks
In Other News
Entertainment
Khloe Kardashian's Family Is 'Supportive of Both' Khloe and Tristan Thompson Amid His Paternity Scandal
Entertainment
Khloe Kardashian Posts Cryptic Message About ‘Negative Energy' as Her Ex Tristan Thompson Expecting Baby No. 3
Sports
LeBron James Cleared to Play for Lakers Again After Two Negative COVID Tests, NBA Says
Sports
UFC's Dana White Calls Joe Rogan for Advice After He and 'Entire' Family Test Positive for COVID