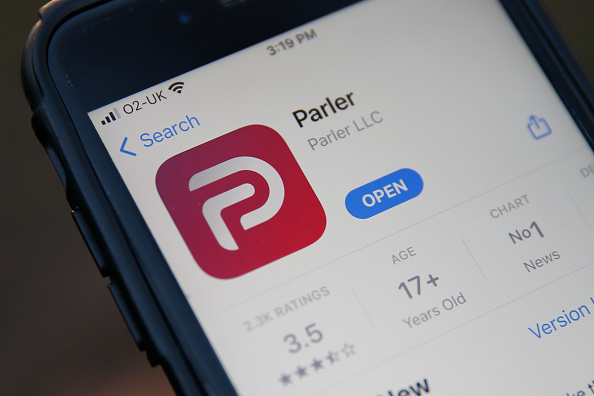 (Photo : Hollie Adams/Getty Images)
A general view of the the Parler app icon displayed on an iPhone on January 9, 2021 in London, England.

Google decided on late Friday to suspend the free-speech focused social-media Parler app from its app store as Apple Inc. also threatened to do the same in wake of the Capitol riot.

BBC said in a report that for months, the Parler app had been one of the most popular social media platforms for right-wing users.

Later on, the Parler app became a right-wing echo chamber where people became fixated in proving voter fraud and attempting to overturn the election outcome, possibly including the Capitol riots.

Days before the chaotic Capitol riot, discussions on Parler became significantly violent, the BBC report said. In some discussions, people were looking for ways to stop the certification of President-elect Joe Biden's victory by Congress.

These removals came after the violent Capitol riot by Trump supporters that left five individuals dead.

The chaos resulted in numerous calls for social media and technology companies to closely monitor usage of their platforms, especially if there are calls to incite violence.

For Google, these postings in the Parler app "seeks to incite ongoing violence in the U.S."

The content went beyond the company's requirements for sufficient moderation of egregious content, Google told The Wall Street Journal.

A Google representative raised the issue, saying Parler would remain suspended until it could address all issues "in light of this ongoing and urgent public safety threat."

But Parler may still be available in other parts of the internet and other Android app stores.

On the other hand, Apple iPhone's App Store also dropped the Parler app due to posts on the social network related to the Capitol riot last week, reported CNBC.

The tech giant said the posts included calls for violence, which runs in violation of their regulations on objectionable content.

A representative to the company added that while they support diverse points of view on the App Store, "there is no place on our platform for threats of violence and illegal activity."

Apple said Parler had fallen short in taking "adequate measures" that could address the threats to people's safety so it will be suspended from the App Store "until they (Parler) resolve these issues."

Fox Business said in a report that Parler executives were sent a letter explaining that it would be off the App Store until they are updated that the app has been "compliant with the App Store Review Guidelines" and has mitigated harmful posts on their site.

President Donald Trump was also banned from his personal account on Twitter on Friday and has been prevented from posting on Facebook through later this month.

In an email, the service's Trust and Safety team also told Parler's Chief Policy Officer Amy Peikoff that the violent messages in the app was in violation of AWS's terms of service.

Since it will be suspended, Parler will be unable to operate and will go offline unless it can find some other hosting service to move into.

Amazon also placed doubt on the effectivity of Parler's plans to use volunteers in moderating calls for violence and hate speech.