Staking a Claim on the Steak of Tomorrow: 3D Printing Tech is Making ‘Meat’

Both cultured and plant-based meat is being created with 3D printing tech, and the results are surprising many.

Whether it comes from a plant or the cells of an animal, it's becoming increasingly clear that the meat of the future will probably not be coming from the flesh of slaughtered animals. Instead, whether made from plants or cells, it will be formed into 'meat' by a 3D printer. In September of 2021, a Japanese team of researchers at the University of Osaka announced that they had 3D printed Wagyu beef. Beef connoisseurs will recognize the name; Wagyu beef is prized (and suitably priced) for its flavor and fat marbling. Legends abound about the cows such beef derives from, how they are allegedly coddled and massaged, fed a special diet that includes beer - but much of those tales are either exaggerated or pure urban legend. As Joe Heitzeberg, the co-founder and CEO of Crowd Cow explains, "There are four breeds native to Japan. Of those four breeds, one of the breeds is genetically unique. It has a genetic predisposition to create this crazy marbling of fat on the inside of muscle tissue. No other livestock does that." The researchers at the University of Osaka used two different types of stem cells from Wagyu cows to create cultured meat, growing living animal cells onto some type of matrix where they are then incubated and grown into animal tissue that has never been part of a living animal. There are currently no reports on the taste of the cultured Wagyu beef but we can assume it's 'good' and given a little time, the technology should be able to produce excellent Wagyu cultured meat - at what price, however, is another big question mark. But there's another simpler solution that could be a better meat replacement than cultured meat, as even meat grown from stem cells still contains cholesterol and some of the negative health concerns associated with animal protein. Plant-based imitation meat is also being created with 3D printers, and the results are surprising even hardcore meat lovers. 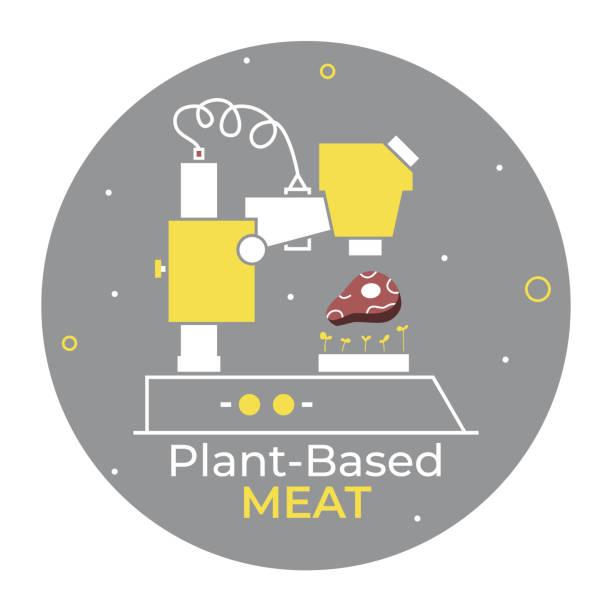 In November 2021, the UK's Guardian newspaper highlighted the 3D steak produced by Israeli startup Redefine Meat after celebrity chef Marco Pierre White invited chefs, investors connoisseurs, and former winners of the MasterChef cooking show to taste it. This vegan 3D steak made with a 3D printer has a secret formula, but according to the Guardian, it includes soy, pea protein, and other vegetables such as beetroot, chickpeas, and coconut fat. But the reason it's winning over meat lovers is the unique idea of printing it in layers. With a layer of 'alternative fat' made from plant-based materials, and then a layer of 'alternative muscle' also made from plants, the imitation meat no longer has a single texture - but like real meat - contains different flavors and textures in different areas. According to the experts gathered by celebrity Chef White, this 'alt-meat' is by far the "closest synthetic approximation ever." The Guardian included the opinion of Ben Bartlett, a chef and barbecue expert, how said: "I judge on taste, texture, and appearance - I've had so many bland and dull plant products. Then suddenly this came along and I was marking them 9s and 10s." Nines and tens are pretty darn good... and give companies like this another 5 years and who knows what they'll be able to offer. Again, 3D printing is the gamechanger. Jane Devonshire, a 2016 MasterChef winner, told the Guardian, "Many of the traditional meat alternatives are fine, but you wouldn't get them past my husband." However, she said the beef alternative she tasted that day made by 3D printing would get an approving nod from her husband.

It's a fascinating development and one that's not necessarily being welcomed by vegans and vegetarians who mostly quit eating meat for one or both of two reasons: health and environmental concerns, and the concerns for the rights of animals. For a vegan, the fact that fake meat has the taste of 'real blood' is not going to be necessarily attractive, and for the vegetarian who's not eaten a kebab for 20 years, the fact that this alt-kebab tastes and smells like real meat is possibly going to be a turnoff. But these folks aren't the target market. The target market is meat-eaters - including meat enthusiasts - and so-called 'flexitarians,' people who would be willing to reduce their meat consumption significantly if suitable alternatives that satisfy evolutionarily developed cravings for the flavors and textures of meat are available. In all fairness, it's probably unlikely that even the best approximation of meat will ever make it to the point where it is 100% indistinguishable from animal flesh. But getting to a 90 would be incredible. The question is now how quickly such startups will be able to get the products on the market, and how much they will charge for them. Until the day comes when a very meat-like meat substitute is available at prices significantly lower than the real deal, it's going to be hard to convince devoted meat eaters or even flexitarians to switch over. But the smart money is on that day coming faster than one might think, and its arrival will change the world.