"OK, Boomer" Goes Viral, But Just How Disrespectful Is It?

There have been different discussions as to the attitudes of people coming from different age groups and generations. It is a common assumption that those who believe in an "old school" way of life are more conservative, compared to those who choose to live a "new school" type of life. These people are most normally described as liberal and can sometimes be seen as volatile.

In recent years however, this divide has grown even more than before. As the younger generation becomes more active in the world, they are now inclined to be heard, to speak there minds, and to stand up for certain causes that they feel strongly about.

Along with this new found voice, albeit mainly through social media, comes an idea that the older generation is to blame for all the wrong in the world, and maybe they are. However, in an attempt to discredit the ideaolgy of the older generation, millenials and generation Z have devised a term, a term that can be seen as highly direspectful.

"OK, Boomer" has gone viral, 'boomer' being short for 'baby boomer', and is typically used by the younger generation in a dismissive fashion and usually in succession to an older person either making a statement or stressing a point.

WHO ARE THE BABY BOOMERS?

WHO ARE THE MILLENNIALS?

WHO ARE THE GENERATION Z?

WHERE DID THE TERM "OK, BOOMER" ORIGINATE?

The term 'OK, Boomer' was first used in 2015 in a song by Peter Kuli and Jedwill, they used to rebutt the annoying run-in experiences they had with elders who were judging their behavior. 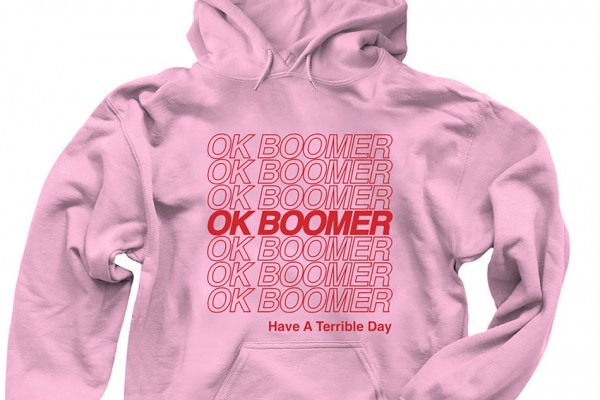 The term 'OK, Boomer' was also used in merchandising and as a fashion statement. However, due to the divisiveness of the term, some companies have banned the apparel will in the workplace.

Tyler Cowen from Bloomberg once wrote that, "As a baby boomer myself, I have mixed feelings about the latest linguistic weapon of generational warfare being deployed against us," He even added that the word just simply implies that the baby boomers are no longer the boss and that their opinion doesn't matter.

People from the baby boomer generation like Cowens, are very cynical towards what the word implies and #boomeradvice even went viral. However, instead of getting appreciation, it was criticized and mocked.

In a study recently explained by Vox's Brian Resnick that older people are more likely to judge the younger generations because of their behavior and outlook in life. The study is a phenomenon called presentism which simply implies that the older generation are more authoritarian and generations of today are not respectful as they were before. The study also shows that adults read more books than the generation of today.