Mexicans Use Red Shoes to Protest Murders of Women 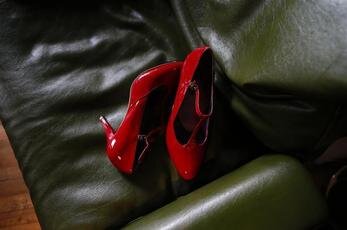 Protesters piled-up many shoes of women that were painted red on the main square in Mexico City on Saturday. It was their way to get the stress the gender-related violence in the country. In Mexico, 10 females lose their lives every day and 10 percent of the crimes are left unresolved.

Residents and tourists collectively watched the protests as they walk through the door of the National Palace and placed five pairs of red-painted shoes on the building's paving stones.

They cry for the murdered women of the country.

According to a family member of a woman, Elina Chauvet who died from domestic violence, as an artist, she had started to use art as a way to protest and fight for the well-being of women in the country. She describes the protests to visualize absence. She explained that the color red showcases the spilled blood and at the same time it represents love.

The protests are the latest series of rallies conducted in the past few months that aim to promote awareness of the serious conditions that the country is facing involving the violence against women. Some of the similar demonstrations involved the protest for anti-rape, where the participants of the rallies scattered glitter over the places they marched and also the protest where demonstrators wore blindfolds while singing "A Rapist in Your Path."

Upon sitting as the country's leader more than thirteen months ago, President Andrés Manuel López Obrador and his administration had promised to prioritize resolving gender-related issues.

In November 2019, the Mayor of Mexico City named Claudia Sheinbaum had alerted the residents of the city for gender-related crimes. Currently, twenty of the federal offices of the country had also done similar declarations. Mayor Sheinbaum said that the action will help promote awareness to the residents and will help develop positive results on its resolution.

As for those who attended the protest on Saturday, results are yet to be seen by the people of Mexico. In 2018, before the current president of Mexico took the position, there were 3,662 reported femicide cases. Despite a change of leadership in the country, the statistics on gender-related violence has increased.

According to an activist for women's rights whose sister died from murder in 2017, the killers are continuing their crime towards the women community. The suspect of her sister's case was first charged with femicide, but was later changed to homicide. According to activists, it is one of the techniques used by the government to mask the significant increase in gender-related cases in the country. She brought a photo of her late sister and the shoes she wore when her dead body was discovered.

She said that the shoes in the protest are missing the women who own them.

Mexico City's newly seated chief prosecutor, Ernestina Godoy Ramos, announced on Friday that she is tasked to promote the security of the city and pledges to offer justice to all femicide cases.