According to Mercury News, Newsom said California would have to shell out $700 million a week for the state's $100 share in unemployment benefits, and that amount "simply doesn't exist."

California does not have an identified source for the amount that it is being obliged, said Newsom. He also said funds from the existing CARES Act had already been allocated for pandemic response efforts such as those for schools, health, and social programs - not unemployment benefits.

With millions of Californians left jobless due to the coronavirus disease 2019 (COVID-19) crisis, asking the state to supply the executive plans would pose a significant burden.

"There isn't enough money sitting in the piggy bank," Newsom said in a Fox 11 report. In a Los Angeles Times report, Newsom noted that the plans would cost the state up to $2.8 billion of the CARES Act fund. Now that the $600 in weekly jobless pay has expired, Newsom and legislative leaders called on the federal government to provide more funding for states.

Newsom's statement came after Trump announced Saturday that he signed an executive order to give $400 a week for jobless payment. In the order, it noted that states had to pick up 25 percent of the cost.

When Trump signed the orders, he told reporters, "The states have the money. It's sitting there."

Trump advised states to use a part of their CARES Act funding, but Newsom said most of it had been spent, and the rest has already been allocated for other disaster relief, like wildfires. Newsom said the $44 billion set aside by the federal government is not enough.

To process the weekly claims, Newsom also warned that the state's old technology in unemployment offices would have to be reprogrammed, causing delays and raising concerns among those who need the benefits.

Let Down by COVID-19 Aid Talks

Despite the burden the state is facing, the governor expressed disappointment that the much higher $600 proposal of the Congress was not agreed upon by Republicans.

He said the state had been waiting for progress in the Congress floor and response from the president. Newsom found "disconnect" in the Congress talks and said the "program no longer exists and there has been no bridge."

For now, the California government talks with the state's legislative leaders to look for other ways of giving continued help to jobless residents since the March stay-at-home order.

Newsom also said Monday that he is talking to legislative leaders to look for more renter protections against evictions.

Evictions have were halted on April 6 and extended through September 30. Once moratoria have been lifted, more than half of Californians are at risk of getting kicked out of their own homes. 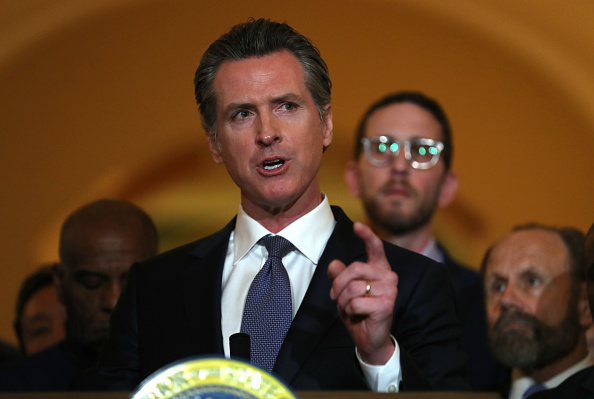 (Photo : Photo by Justin Sullivan/Getty Images)
Newsom speaks during a news conference at the California State Capitol on March 13, 2019 in Sacramento, California.

California has 80 cities and 10 counties with moratoria in place. Of the state's renters, three-quarters have fallen behind on rent, especially the Latinx or Black community.

Newsom said Latinx renters make up 62 percent of those unable to pay rent as a result of the economic impact of the COVID-19 crisis.

Want to read more? Take a look at these!