The Senate GOP is preparing for a quick Supreme Court confirmation process for Amy Coney Barrett, setting for a vote less than 40 days before the election. 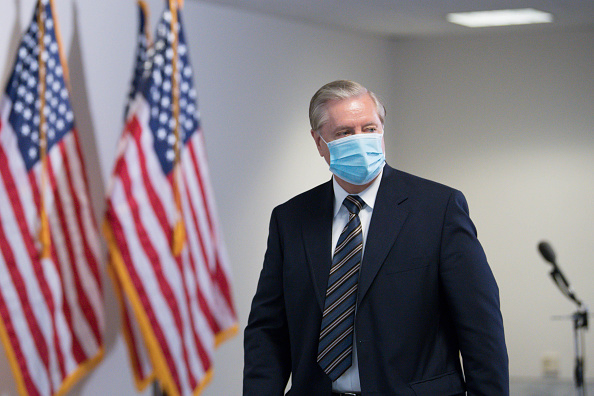 (Photo : by Liz Lynch/Getty Images)
Sen. Lindsey Graham exits a closed luncheon meeting in the Hart Senate Building on Capitol Hill on September 24, 2020 in Washington, DC. Senate Republicans plan to vote to nominate a new Supreme Court Justice before the end of the year.

Senate GOP is eyeing to vote in late October, according to AP News. But Senate Majority Leader Mitch McConnell still hasn't said if a final Supreme Court Confirmation will occur before or after Election Day.

Voting on the Supreme Court confirmation so close to the election could lead to an explosive fight between both sides of the aisle. It creates significant political risk and uncertainty for both parties.

The Senate GOP set the confirmation process in motion after Trump formally named Barrett as his pick. He did so during a televised White House event.

CNN reported that the push for a high court pick in just 38 days could lead to modern history's quickest confirmations. The report said no Supreme Court nominee has ever been confirmed after July during the presidential election year.

According to The Hill, Barrett will need to fill out a committee questionnaire and undergo an FBI background check. It is a process that all Supreme Court nominees go through.

From these, Barrett will meet with senators. This includes a meeting with Senate Majority Leader Mitch McConnell by Tuesday.

The Senate Judiciary Committee will have four-day long meetings on the week of October 12, said sources familiar with the timeline.

That is made up of one day of opening statements, two days of questions, and the last day for outside witnesses.

Once the committee has approved, the Senate will hold a final vote. If the process goes smoothly, the final vote can happen by November 3.

Sen. Lindsey Graham said the committee's chairman would move quickly on Trump's high court pick. He is facing his own tough reelection run.

Traditionally, a Supreme Court nominee meets with each senator before confirmation hearings start. This process could begin as soon as this week.

McConnell vowed on Saturday that Barrett's seat in the court will be voted on in the "weeks ahead."

"I hope all 100 Senators will treat this serious process with the dignity and respect it should command," McConnell said in a statement. He also said Barrett deserved a fair process based on her credentials.

"I'm very committed to ensuring that the nominee gets a challenging, fair, and respectful hearing," said Graham. He added that the committee would move forward, knowing that Trump has "picked a highly qualified individual" to serve the high court.

Barrett's confirmation schedule is expected to be formally announced on Saturday during a Fox News interview.

The fight is picking a replacement for late justice Ruth Bader Ginsburg comes at a vital time in U.S. politics. If Barrett officially gets the seat to Supreme Court, she will be the third one under Trump's tenure.

The decision could lead the court, and all of America, to lean in a more conservative direction for decades to come.