It seems that Supreme Court nominee Amy Coney Barrett is only weeks away from being confirmed as the next justice on the high court.

As the confirmation hearings begin on Monday, Barrett will be introduced to the public by two senators from Indiana and a former law professor as the Supreme Court nominee.

According to the committee's details released on Friday night, Senator Michael Braun and Senator Todd Young, both Republicans, and Patricia O'Hara, a former Notre Dame Law School professor, will speak at the beginning of the Senate Judiciary Committee hearing. 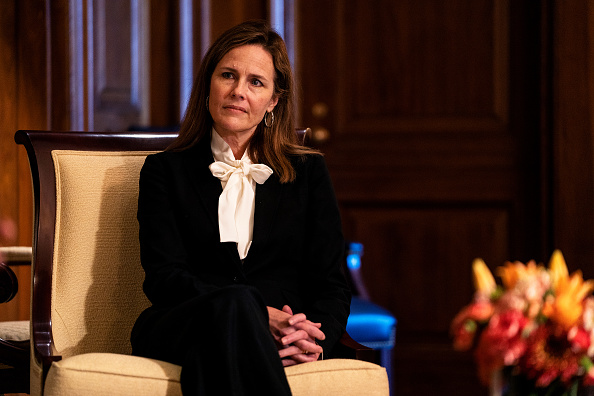 (Photo : Demetrius Freeman - Pool/Getty Images)
Senators Meet With Supreme Court Nominee Amy Coney Barrett WASHINGTON, DC - OCTOBER 01: Judge Amy Coney Barrett, President Donald Trump's nominee to the Supreme Court meets with U.S. Sen. Josh Hawley (R-MO) (not pictured) during a photo-op at the U.S. Capitol on October 1, 2020 in Washington, DC. Barrett is meeting with senators ahead of her confirmation hearing which is scheduled to begin on October 12, less than a month before Election Day.

Each of them will deliver a five-minute speech about Barrett's qualifications for the Supreme Court before she is sworn in to testify, as per Fox News.

Barrett will also deliver her opening remarks to the committee to cap off the hearing's first day, and Senate Democrats on the committee are set to ask her on the issues of abortion, health care, and gun rights on Tuesday.

All hearings will be hybrid in-person and virtual, and senators can opt to join teleconference anytime. Senate Republicans are targeting to confirm Trump's third Supreme Court pick before the election.

In 1997, Barrett graduated from Notre Dame Law School. She returned to Notre Dame in 2002 as a law professor after clerking for the late SC Justice Antonin Scalia and working in private practice.

Barrett added a series of documents to her disclosures ahead of her confirmation hearings. It includes a "right to life" advertisement against the landmark Roe v. Wade decision of the high court that legalized abortion.

As per Daily Mail, Democrats have repeatedly voiced concern that Barrett will work to abolish Roe v. Wade.

On Friday, CNN revealed the details of the two anti-abortion talks that Barrett attended in 2013 as a law professor at the Notre Dame. One was a lecture held by the law school's Jus Vitae club. Another was a seminar co-sponsored by the school's Right to Life club and constitutional studies minor.

Barrett initially failed to disclose the ad she signed and the two talks on Senate paperwork.

To add new documents to her nomination disclosures, Barrett sent a letter to Senate Judiciary Committee chair Lindsey Graham and Dianne Feinstein, the ranking Democrat on the committee.

She wrote: "Since submitting my response on September 29, 2020, to the Committee's Questionnaire regarding my nomination, I have been made aware of some items that you may have already seen."

Aside from the ad, Barrett also submitted the notes on the two talks, plus a 2013 document produced by the Notre Dame Fund to Protect Human Life and the University Faculty for Life.

The document noted that that abortions had killed more than 55 million children in the 40 years since the high court's infamous Roe v Wade decision. Around 100 people, including Barrett, signed the document.