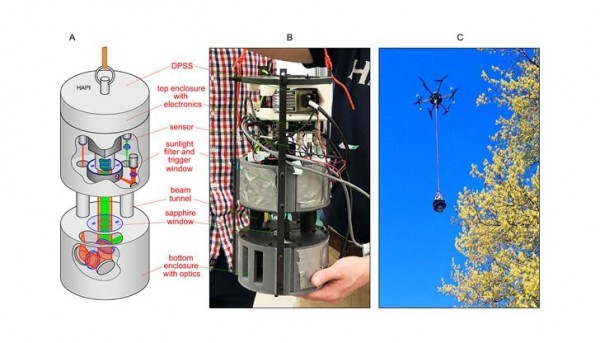 A miniaturized holography drone device used to detect and characterize aerosols was developed by the U.S. Army, teamed with experts from universities.

The drone device is being used on unmanned aerial vehicles to safely and efficiently capture photos, said Army Research Laboratory in a statement.

Using this device, soldiers will be more aware of areas they're operating in, detecting potentially lethal aerosols.

The drone device is called the holographic aerosol particle imager, or HAPI.

It can provide imagery of particles that enter its sensing volume from any direction using a single measurement. It will obtain those images in a non-contact manner.

The HAPI will be useful in identifying threats like biological warfare agents, reported FOX News.

It can characterize particles larger than ten micrometers within its sensing volume of three cubic centimeters.

To ensure its small size and lightness, the HAPI is constructed from 3D-printed polymer structures. With these specifications, it can be easily carried by a "commercial grade" drone, said the Army.

The device is also inexpensive since the researchers used visible light and cost-effective parts and components.

So far, the technology is being used to asses dust and pollen.

With the changing climate the world is facing today, offering quantitative assessments of aerosols can be important, but it still uncertain.

Since the HAPI can determine the size and shape of aerosol particles, it can help in reducing this uncertainty.

The emerging technology was first made known through a paper published in the journal Nature Scientific Report.

The Start of the Drone Device Project

The HAPI started as a project by the Army Research Laboratory. It was part of the U.S. Army Combat Capabilities Development Command, about a decade ago.

Videen described their project as a "novel idea" at the time.

"Gaining information about aerosols is hard because they don't sit still," he said. "So they are difficult to image because the focal plane of cameras is so narrow."

He added that this problem was solved through the use of holography since the focusing was done through a computer.

Apart from the two researchers, experts from other universities also took part in the project.

The Army added that images can also be captured real-time with more onboard processing. These captures can be sent to a computer or a phone through Wi-Fi or Bluetooth.

Using aerosol holography is just the start for what Videen believes is a future of more detector systems. He sees more developments to provide soldier protection.

As the aerosol drone device continues to be developed, the next step is to increase the resolution to assess smaller particles. The smaller particles are the real life-threatening aerosols to look out for.

In a separate project, researchers are aiming to develop technology that can recharge drone swarms.

© 2021 Latin Post. All rights reserved. Do not reproduce without permission.
Most Popular
Our Picks
In Other News
Latin Entrepreneurship
5 Natural Energy-Boosting Tips To Increase Work Productivity
Business
Elie Zeschkowski Is A Young Entrepreneur And Founder Of Elyzée Events Agency
Business
Samit Max Patel’s Business Joopio Creates Innovative Strategy TLFES used by FTSE and NASDAQ 100
Latin Entrepreneurship
Reza Abbaszadeh Finally Cleared His Name After Being Accused of Manipulating the Market in 2019.