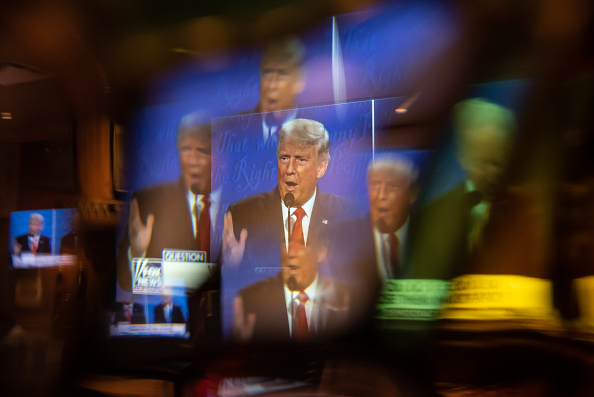 (Photo : Sergio Flores/Getty Images) President Donald Trump is seen on screen through a window at a watch party for the final presidential debate with former Vice President Joe Biden on October 22, 2020 in San Antonio, Texas.

President Donald Trump defeated Democratic nominee Joe Biden in Texas on Tuesday, fending off hopes to turn the state blue during the elections.

The Lone Star State was called for Trump a little after 1 a.m. EST Wednesday by the Associated Press. With this year's win, the president was granted the 38 electoral votes in Texas.

Texas has been America's most reliable red state.

In 2016, Trump also won there by a nine percent margin against Hillary Clinton, which was the GOP's narrowest margin for some time, said The Hill.

According to the Texas Tribune, Trump was poised to win the votes at 52 percent based on early votes. That is 5.4 points ahead of Biden, who had 46.6 percent.

This year's margin is now the second-narrowest margin for a general election. The GOP nominees who came before, Mitt Romney and John McCain, won the state by 16 and 12 points, respectively.

Early returns did not include votes cast on Election Day, where polls showed Republicans are more likely to show up.

Despite efforts from the Biden campaign to target Texans, Trump's team remained confident leading up to the election that they'll hold the state.

Texas has not put in a Democratic vote in a presidential race since 1976, during which Jimmy Carter was elected.

Polls showed that the Lone Star State would put up a closer, more exciting fight. So Democrats hoped that a surge in voting could lead to better performance on Biden's ticket.

Prognosticators even argued that perhaps Texas was becoming a swing state for the first time in decades. Only a few in the party thought Biden would win the state, but they hoped that the margin would be close enough for future Democratic gains.

Biden managed to perform well in Texas's metropolitan regions, but he struggled to gain support from the state's Hispanic voters, particularly in the Rio Grande Valley. Ultimately, he struggled in overcoming Trump's strength in rural areas.

On early Tuesday, Trump said he believed he would get a landslide victory.

"A lot of people talked about Texas... We will have a tremendous victory there," he said.

In-person voting was the main voting method in Texas since it was just one of five states that did not make a dramatic expansion of mail-in voting this year.

Several legal challenges arose in the state, prompting officials to play out in courts on how to mail ballots and where ballots could be dropped off.

In Texas, mail-in ballots were only granted for 65 or older voters, disabled, or out of the county on Election Day and during early voting.

As of late Monday, drive-thru voting was part of this legal battle. Republican activists wanted to stop this means of casting ballots, but a federal appeals court denied the request.

Unlike during the last election, neither Trump nor Biden made an all-out play to win Texas. No visits were made before Election Day, and Trump did not spend on TV ads in the state.

Biden made some small attempts at gaining ground by sending surrogates to campaign on his behalf in October.

© 2021 Latin Post. All rights reserved. Do not reproduce without permission.
Most Popular
Our Picks
In Other News
Sports
LeBron James Shares His 'Blueprint' With Son Bronny, Dreams of One Day Playing in the NBA With Him
Entertainment
Khloe Kardashian's Family Is 'Supportive of Both' Khloe and Tristan Thompson Amid His Paternity Scandal
Entertainment
Khloe Kardashian Posts Cryptic Message About ‘Negative Energy' as Her Ex Tristan Thompson Expecting Baby No. 3
Sports
LeBron James Cleared to Play for Lakers Again After Two Negative COVID Tests, NBA Says