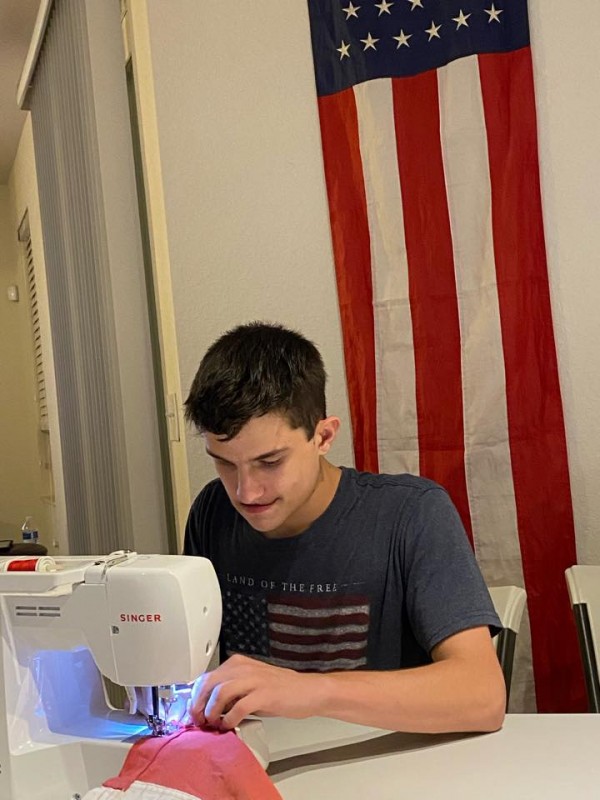 A Florida teen with autism is on a mission to fix as many tattered American flags as possible.

According to a FOX News report, 16-year-old Matthew Amatulli has made it his life's mission to put up an American flag on every flagpole there is at Palm Beach County.

He has been doing so by fixing the tattered American flags himself, refurbishing local businesses' flags.

The Florida teen's mother, Angela Amatulli, told CBS affiliate WPEC that the flag's movement has calmed down Matthew as a little boy.

She added that Matthew's grandmother taught him to sew American flags with a sewing machine when he was seven years old.

From then on, the teen's love for American flags started. Angela said that when giving the boy a present for his birthday, he just wanted to have flags.

As Matthew grew older, the teen's love for flags became more of a hobby, Breitbart reported.

According to a post from Matthew's Facebook page, he really loves to fly his flags on the flagpoles of local businesses.

The post went on, saying if the teen does see a tattered and torn flag, he tries to take it down to replace it with a new one or "like new."

"This is his passion and he has been doing it for more [than] 4 years," said the post.

On his Facebook's "about page," it said that Matthew also buys new flags to fly "when [he has] birthday money."

"He is a very old soul and he just loves the American flag," his mother added, noting that not many people of any age are so involved in repairing torn flags. "Not even adults think twice," she said.

The parts that need repairing are usually the ropes and hooks, when they are about to break, said the page.

The family assured that if a flag can no longer be repurposed, they abide by the U.S. flag code in making sure those are properly attired.

Local businesses supported the movement started by the Amatullis. They allow the 16-year-old to take down their flags if they are tattered and replace them with refurbished ones.

It appears Matthew also actively searches for flagpoles to fly his flags on. His mother narrated that when he sees a pole in any business without a flag on it, he will ask if he can put up his flag on it.

But Angela encouraged Matthew to start his own flag business soon, saying she can't continue to afford to buy the parts her son will need in his mission.

As Matthew cared a lot about flags, one of his recent activities included saving flags around his area. He and his mother drove down State Route 7 before the storm made landfall.

They managed to take down some flags from Boynton Beach Blvd to Okeechobee Blvd so that the heavy rain and strong winds won't tear the flags.

© 2021 Latin Post. All rights reserved. Do not reproduce without permission.
Most Popular
Our Picks
In Other News
US News
Los Zetas Cartel Boss Is a Mexico Top Cop; Authorities Are Now Looking for Him
US News
Taliban Conducted Summary Executions of Former Soldiers, Police; U.S. and Other Countries Condemn the Act
US News
Brazil Supreme Court Investigates Bolsonaro's COVID-19 Vaccine Claim! Bralizian President Defends His Livestream
US News
Rare Sea Turtle From Gulf of Mexico Found on UK Beach! Experts Say It's a Sign of Kemp's Ridley Sea Turtle Recovery