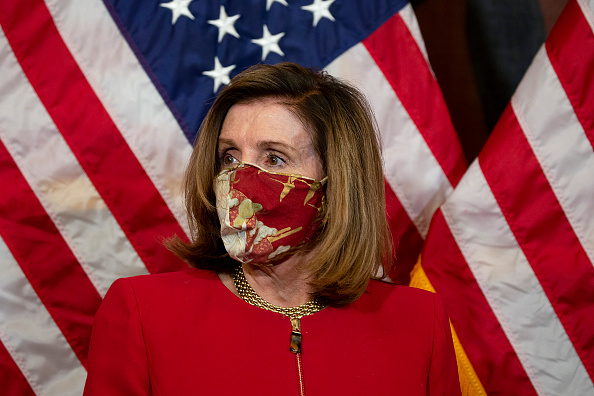 (Photo : Tasos Katopodis/Getty Images)
Speaker of the House Nancy Pelosi (D-CA) wait to take part in in the ceremonial swearing in for Congressman Kwanza Hall (D-GA) on Capitol Hill.

Republican Senator Mitch McConnell and Democratic House Speaker Nancy Pelosi have been the primary figures over the second round of stimulus package.

Despite their disagreements over the amount of the next package, it seems that another round will be delivered before the year ends.

McConnell and Pelosi talked over the phone

The spokesperson of House Speaker Nancy Pelosi confirmed that Sen. Mitch McConnell and the Democratic leader talked over the phone.

In the Twitter post of the spokesperson, it said that the discussion was "about their shared commitment to completing an omnibus and COVID relief as soon as possible."

In a separate statement, Sen. Mitch McConnell also said that they have a good conversation. He also claimed that they are both interested in getting an outcome and that is through omnibus and another coronavirus package or stimulus, according to Chicago Tribune.

Their phone conversation occurred on Thursday and it happened a day after Nancy Pelosi signaled a willingness to make major concessions in search of a COVID rescue package in the $1 trillion range. The two lawmakers are known as frequent rivals but they are both instrumental as dealmakers.

Read also: There's No Reason Another Stimulus Package Should Be Delayed, McConnell Says

Many Republican and Democratic lawmakers support the $908 billion stimulus package and it has strong bipartisan support.

Even though it is a little bit higher than McConnell's skinny bill and less than half of the previous offer of the White House, it still gained support from two parties.

Republicans from COVID hotspots like North Dakota and Iowa said they were comfortable with an aid package carrying the almost $1 trillion price tag. Sen. Kevin Cramer, R-N.D., said the bipartisan plan is "the right balance of compromise and it's a number that's doable."

McConnell Signals Support of the Stimulus

The phone conversation between McConnell and Pelosi is a good sign that the $908 billion stimulus could pass both in the House of Representatives and Senate. McConnell signaled that they are willing to accept the amount this summer.

McConnell also said that there is no reason that the stimulus package will not be passed before the year ends. In fact, just a day after McConnell secured his post in Kentucky, he immediately said another relief package will be his topmost priority.

Joe Biden also expressed his support over the proposed $908 billion stimulus. However, he also said that the bigger amount will be given once his term starts in January. Biden showed support after Democratic leaders indicated their willingness to strike the deal before the year ends.