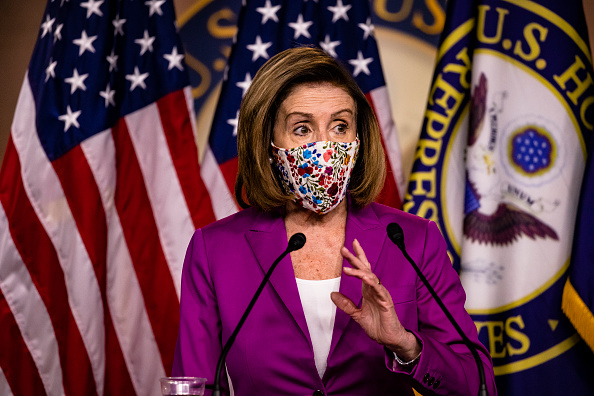 (Photo : Samuel Corum/Getty Images) Speaker of the House Nancy Pelosi calls for the removal of President Donald Trump from office either by invocation of the 25th Amendment by Vice President Mike Pence and a majority of the Cabinet members or Impeachment at the U.S. Capitol on January 7, 2021 in Washington, DC.

House Speaker Nancy Pelosi said she wants President Donald Trump's impeachment to stop him from pardoning people involved in the storming of the Capitol and running for president again.

Pelosi's proposal to a Trump impeachment came on the eve of Democrats' plans to vote on an article about it. But she noted that instead of a Trump impeachment, it would be preferable if Vice President Mike Pence used the 25th Amendment to get the president out of the White House, reported Daily Mail.

"I like the 25th Amendment because it gets rid of him - he's out of office," Pelosi said, adding that there had been more support from Congress to impeach the president.

Pelosi said that if the president's remaining days in office were left uncontested, he could pardon the crowd that stormed the U.S. Capitol on Wednesday.

Daily Wire reported that the articles for impeachment by Democrats have at least 180 co-sponsors and is set to be introduced on Monday. But proceedings that would follow could take months.

House Majority Whip Jim Clyburn said on Sunday that the House Democrats might not even be able to send the articles for impeachment to Senate until at least 100 days of the Biden administration.

It's unlikely that Trump would be impeached before President-elect Biden's inauguration on Jan. 20. However, a conviction from the Senate could prevent him from being president again.

Trump has hinted several times that he plans to run for the White House in 2024. But the riots which caused the death of five people pushed two of the president's allies from the Republican Party to ask for his resignation, reported The Associated Press.

Sens. Lisa Murkowski of Alaska and Pat Toomey of Pennsylvania called for Trump to "resign and go away as soon as possible," the report stated.

"I think the president has disqualified himself from ever, certainly, serving in office again," Toomey said, adding that the president doesn't seem to be "electable in any way."

Sen. Roy Blunt, also a Republican, didn't go so far as to demand a resignation but told Trump to be "very careful" as he is finishing his days in office.

Trump's Speech May Not Be Enough for His Impeachment

Turley told "Fox & Friends Weekend" that Trump was calling for people to protest - a message that can not be easily interpreted as insurrection. He added that when the president talked to his followers, he asked them to march to Congress "peacefully."

Turley advised the Congress to think carefully about the charges that it would carry out under constitutional means.

In an op-ed with The Hill, the law professor warned that even though Trump's comments appear to be "reckless and wrong," pushing for a swift Trump impeachment will be damaging to the U.S. Constitution.