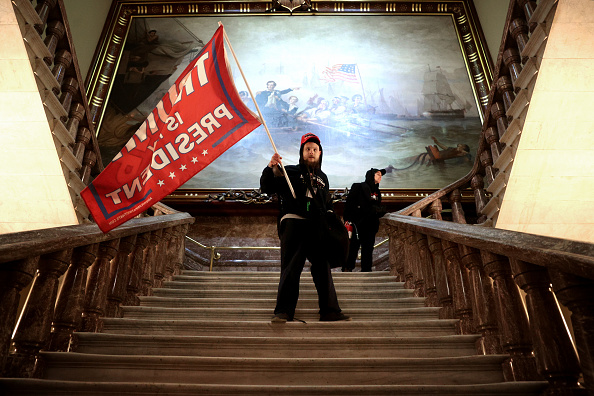 Seven more people have been charged in federal court in connection to their suspected participation in last weeks' Capitol riot, the Justice Department announced on Wednesday.

Dozens of arrests have been made by authorities following the January 6 Capitol riot where supporters of President Donald Trump stormed the Congress in an attempt to stop vote counting for President-elect Joe Biden.

This group of Capitol riot arrests includes Robert Keith Packer of Virginia who was seen wearing a "Camp Auschwitz" sweatshirt-a reference to the Nazi concentration camp-at the time of the siege and Nicholas Rodean of Maryland who was wearing his badge inside the Capitol, reported CBS Baltimore.

The arrests were made in several states, from New York to Florida, as reported by Fox News.

Packer was charged for knowingly entering or remaining in a restricted building or grounds without lawful authority and violent entry or disorderly conduct on Capitol grounds.

A federal affidavit obtained by said a witness noticed that Packer was a "routine customer" at a store near Newport News.

On the other hand, Rodean was taken into custody after he was seen carrying a large "Trump is My President" flag at the Capitol riot and an apparent badge from his lawmaker.

He was identified by others through social media and the Department of Motor Vehicle databases.

Rodean faces charges for knowingly entering or remaining in any restricted building or grounds without law authority, disorderly conduct on Capitol grounds and parading, demonstrating, or picketing in the Capitol buildings.

Aaron Mostofsky, the son of a Brooklyn Supreme Court Judge, was arrested in New York on Tuesday for theft of government property.

Another New York resident arrested for Capitol riot participation is William Pepe, who was caught in Florida on Tuesday. He was also arrested for knowingly entering or remaining in any restricted building or grounds.

Three men named Andrew Williams, Josiah Colt, and Kevin Loftus were also charged for knowingly entering or remaining in any restricted building or grounds without law authority, with Colt and Loftus also charged for violent entry and disorderly conduct in the Capitol.

Richard Barnett, who was photographed sitting in House Speaker Nancy Pelosi's office, also faced one count of knowingly entering or remaining in any restricted building or grounds without law authority, violent entry and theft.

Even though only 75 people were arrested during the Capitol siege, random protesters are still getting stopped and frisked by police, a report from NBC News said.

A week since the riot, authorities have turned up with weapons of many kinds among the arrests they made.

Authorities found at least a dozen guns and thousands of rounds of ammunition from seven different people, said the report.

In one instance, an Alabama man was found with a massive arsenal of five guns and hundreds of ammunitions.

They also found brass knuckles, pocket knives, stun guns, "stinger whips" and a crossbow with bolts, among others.