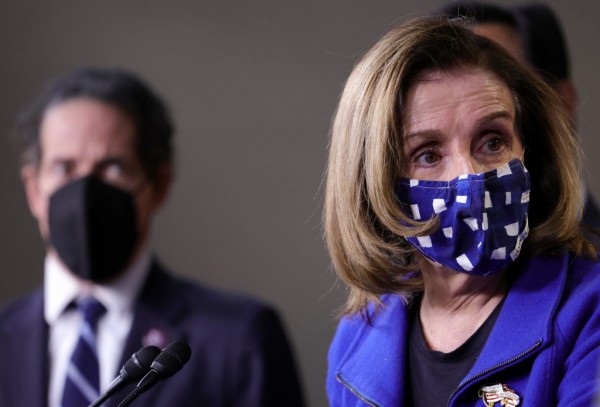 Top Republicans on several House committees demanded answers from House Speaker Nancy Pelosi about security decisions made leading up to and on the day of the insurrection at the U.S. Capitol on Jan. 6.

They sent a letter to Nancy Pelosi on Monday, saying that "many important questions" concerning her responsibility for the security of the Capitol leading up to the riot "remain unanswered."

USA Today reported that federal prosecutors continue to charge Capitol riot participants, adding to the many arrests that already took place in Washington D.C. that day.

The Senate has already acquitted former President Donald Trump on the charge of inciting the Capitol siege. But Senate Minority Leader Mitch McConnell and others reportedly noted that prosecutors have not yet had their say, and legal repercussions are still possible.

On the day of the Capitol riot, Trump supporters reportedly outnumbered the Capitol Police and dangerously came close with lawmakers clustered inside the building.

Read also: As Trump Moves on After Impeachment Acquittal, Biden Says Charge 'Not in Dispute'

What the GOP Letter Says

According to a New York Post report, Republican lawmakers said the Speaker is responsible for all operational decisions made within the House. They further noted that they had witnessed a "very heavy-handed and tightly controlled approach to the House operations" from Pelosi, her staff, and an army of appointed House officials for the past two years.

Fox News added that the Republicans also asked Nancy Pelosi if "Sergeant at Arms Paul Irving get permission or instruction from your [Pelosi] staff, on Jan. 4 prior to denying Chief Sund's request for the national guard?"

Fox News reported that Pelosi's office said the Capitol's security and democracy are "not the priorities of these ranking members." Pelosi's office added that "the Committees of Jurisdiction were briefed in advance of Jan. 6 about the security preparedness."

On the request of Sund for a National Guard support, Pelosi's office said: "It is the Job of the Capitol Police Board, on which these three individuals sat, to properly plan and prepare for security threats facing the U.S. Capitol."

Pelosi's deputy chief of staff, Drew Hammill, further noted that Irving has said that he did not present to House leadership any request for the National Guard before Jan. 6.

Following the firings of Irving and Sund last month, Pelosi appointed retired Gen. Russel Honoré to lead a security review of the events at the Capitol. But the Republicans said that "while there is wide-spread support to conduct an independent security review, Honoré was appointed solely by Pelosi, without consulting the minority.

They also raised concerns about obstruction and inability to procure information from the House officers when requested.

Nancy Pelosi earlier said that she called for Sund's resignation because he has not "called us since this happened." But Republicans noted that claim was "refuted" by Sund, who detailed that he briefed Pelosi on the Capitol's situation - "the first occurring at 5:36 p.m. and the second at 6:25 p.m.," both on Jan. 6.

Pelosi's office told the New York Post that ranking Republicans were only "trying to deflect responsibility for the Capitol attack" from Trump, and the letter was a "transparently partisan attempt to lay blame on the Speaker."

Five people died during the mob of Trump supporters, including a Capitol police officer who died from injuries. Two other officers died by suicide within days after the siege.

Last week, Nancy Pelosi said she would introduce a resolution to give the Congressional Gold Medal, which is the highest honor Congress can bestow, to the Capitol Police officers and other law enforcement personnel who protected the Capitol during the riot. Pelosi noted that they "are martyrs for our democracy."

WATCH: Nancy Pelosi Speaks as Congress Reconvenes After the Riot at Capitol from CNN

© 2021 Latin Post. All rights reserved. Do not reproduce without permission.
Most Popular
Our Picks
In Other News
US News
Private Collector Returns Mayan Artifact to Guatemala After Plans of Auctioning It in 2019
US News
Day of the Dead or Dia De Muertos Parade in Mexico City Returns After Being Canceled in 2020 Due to COVID
World
Bank of Mexico Releases New 20-Peso Bill, Coins to Commemorate 200 Years of Country's Independence
US News
Mexico Creates National Guard Special Team to Recover Stolen Archaeological Pieces