Latino Romantic Comedies to Swoon Over This Valentine’s Day 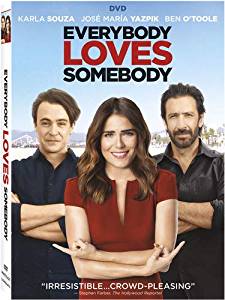 This is for everyone who is celebrating Valentine's Day not just for those who are in a relationship but also for those who are celebrating the love because of their years of friendship. Some instead choose to celebrate their Valentines' Day in crowded places they rather stay at home and even have a Galentines Day by watching movies.

There's no need for you to get sad this day of you don't have a person to date. We have compiled some Latino movies that are intended, not only for lovers, but also for years of friendship that includes female friendship and LGBTQ dramas. Here are some of them according to a published article in Remezcla:

This Mexican movie is directed by Catalina Aguilar Mastretta and was produced in 2017. This is about Clara Barron who is a successful OB-GYN in Los Angeles. Her story is about choosing between going back to the past or open her heart in a new love. The story started when she was invited for a family wedding in Mexico and with this, she asked one of her co-workers to pretend as her boyfriend. This was not easy for her because she slowly fell in love with her co-worker. Unfortunately, she did not expect that she will see again her ex-boyfriend in Mexico that she has not seen for a decade. She's just so lucky that she has a family who helped her to choose between the two, either going to the past or moving forward with the newfound love.

This movie was released in Brazil in 2014 and was directed by Daniel Rebeiro. This movie best suits for the LGBTQ community for this received citations in different LGBT film festivals across the globe. This is a story about Leonardo who is blind and wants to study abroad. However, one of the obstacles that she is facing is her overprotective mother. Everything changes when a teenager named Gabriel showed up in the school where he is studying. Gabriel is a very attractive person that he even attracted Leonardo. This is where gay love begins. This is a must-watch movie most especially for the LGTQ community.

This is a classic movie that was produced in Mexico in 1992. This is a movie that will make you cry. This is a story about Tita, the youngest member of a traditional Mexican family, who was not allowed to marry her true love Pedro. On the other hand, Pedro's aging mother whom he cared so much pushed him to marry Tita's sister Rosaura. However, the love between Tita and Pedro remained despite decades of revolution, family upheaval, and sickness. This will help you define what true love means.

This movie was released in the United States in 2001 and was directed by Adam Shankman. This is a classic rom-com that was starred by Jennifer Lopez who played the role of Mary who is a wedding planner. Mary is about the plan the wedding of Fran Donolly, catering heiress, and Steve Edison. He first met Edison after he saved her from an incoming car. After it happened, Mary's best friend started to arrange their date but Mary did not know that the man he is dating, Steve, is the man that Fran Donolly will get married to. This is about choosing between lover over her career or career over her love.

This movie was released in the United States in 2017 and was directed by Ken Marino. This is one of the movies that were played by prominent Mexican stars. This is the story of Maximo whose gigolo days are left behind after he married a woman who is twice his age. After 25 years of Maximo's marriage with the woman, he was replaced by a younger though less attractive car salesman. This led him to end up with his estranged sister played by Salma Hayek and her young son Hugo. Maximo finds out that he will have his ticket back as a wealthy person if he will pursue the grandmother of Hugo through his help. This is a laugh out loud comedy.