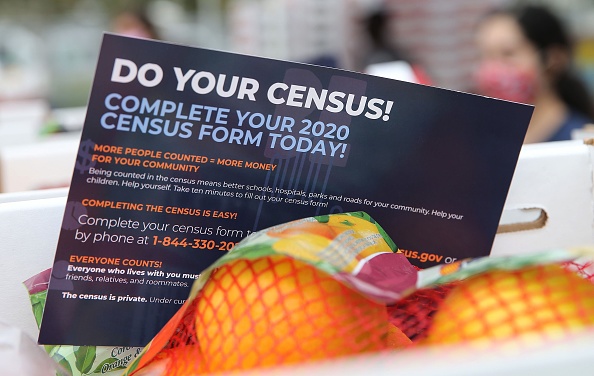 (Photo : Photo by Mario Tama/Getty Images)
Census information pamphlet is included in a box of food to be distributed by the Los Angeles Regional Food Bank to people facing economic or food insecurity amid the COVID-19 pandemic on August 6, 2020 in Paramount, California.

In a San Francisco Chronicle report, the lawyers added that the White House move on census data could not be challenged in court.

But many skeptics are looking through the White House decision. With undocumented immigrants out of census data, the new data will make some drastic changes in districts' seats, CNN noted.

New York Attorney General lawyer, Judith Vale, said the order on undocumented immigrants "violates more than 200 years of history, practice, and judicial precedent." In a Reuters report, she also added that the move is already discouraging participation in the census.

A suit filed in Washington claimed that Trump's decisions would unfairly treat some states.

But Justice Department lawyers also said Wednesday that the court filing has to be dismissed. They said the law already bans "judicial intrusion on the president's exercise of policy-making discretion."

The suit was filed in July by advocacy group Common Cause and other voting-rights groups. The Justice Department also said the same arguments Thursday in a hearing in New York.

Republican presidents appointed two of the three judges but they appeared concerned. Pulling out immigrants from the data raised some concerns as the census form itself does not have a question on citizenship, noted The Hill.

In court, there are two separate but similar cases. Facing court in a hearing, the White House argued that the case is "not yet ripe".

They said Commerce Secretary Wilbur Ross has not yet found if he has enough information if he can do Trump's plans.

So, right now, the case is on a standstill. "We should wait to see what is feasible, what those numbers are, and then the case can proceed," said Sopan Joshi, a senior Justice Department attorney.

There are some other suits filed by other states. Another one is from a San Francisco court that was filed by the state of California. It also includes some counties and cities like Oakland.

He said the census does not have the discretion to work with the census data to his liking once it has been completed.

"Even in a dry season, it is fair to trace the fire to the arsonist," Ho said.

Census data is also used to give out $800 billion in federal aid each year. This also raised alarms for advocates.

But Trump's order is only limited to political apportionment and did not mention concerns with funding.

A statement from the White House press office came with the order. It said that states which "encourage violations of the federal immigration law" should not be rewarded with House seats.

The statement also said that "one-state"-likely to be California-could lose a seat or two in the House if "illegal aliens" were put out of census data.

What Does the Law State?

California has 53 House seats right now and about has about 2 million undocumented immigrants in it. There are nearly 40 million people in the state.

The Constitution stated that congress seats are determined by "actual enumeration" every ten years. The 14th Amendment also said that the seats would be shared out evenly based on the whole number of persons in each state.

Past leaders and courts have read through these provisions as giving House seats based on the actual population. They did not take legal status into account.