According to Fox News, the pair, who were first rumored to be dating in March, announced their engagement in July.

Lovato and Ehrich likely confirmed their relationship when they were featured in Ariana Grande and Justin Bieber's "Stuck with U" music video. Now, just two months after announcing their intended nuptials, the engagement is over.

A source told People magazine that it was a tough decision, but Lovato and Ehrich decided to go their separate ways and focus on their careers.

"They have respect and love for one another and will always cherish the time they spent together," the source added. 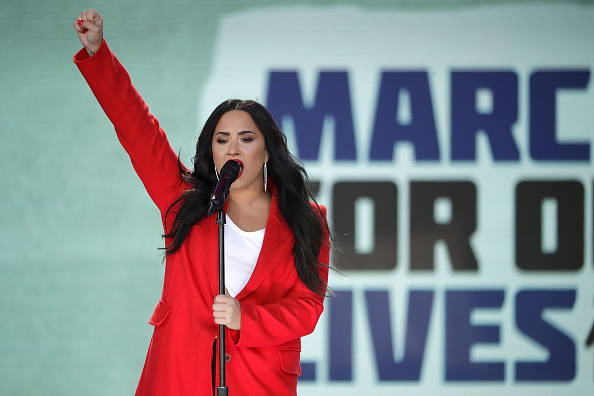 (Photo : Chip Somodevilla)
Hundreds Of Thousands Attend March For Our Lives In Washington DC WASHINGTON, DC - MARCH 24: Demi Lovato performs "Skyscraper" during the March for Our Lives rally on March 24, 2018 in Washington, DC. Hundreds of thousands of demonstrators, including students, teachers and parents gathered in Washington for the anti-gun violence rally organized by survivors of the Marjory Stoneman Douglas High School shooting on February 14 that left 17 dead. More than 800 related events are taking place around the world to call for legislative action to address school safety and gun violence.

On Thursday, Ehrich posted on his Instagram, showing he is currently filming a movie, but the place where the shoot is taking place is unknown. Just this weekend, the star also shared a post on Instagram tagging a music studio in Georgia.

Lovato and Ehrich have lots of respect and love for each other despite what happened, the insider insisted. A week after an insider told E! News that the "Sorry Not Sorry" hitmaker's loved ones were doubting the "Young and Restless" star's intentions. "People close to Demi have expressed that they are worried and are hesitant about Max," the source said.

US Magazine reported that Lovato and Ehrich made their first appearance together, when the singer suddenly emerged in Ehrich's Instagram Live in March. Ehrich can be seen playing the piano when Lovato walked into the frame with a big smile on her face.

Ehrich softly said in the video: "I am alive." Lovato is seen covering her face with a blanket.

The couple announced their engagement on social media after four months of dating. In Lovato's official Instagram account, the singer uploaded a couple of pictures sharing the exciting news with her followers.

Through the COVID-19 pandemic, Lovato and Ehrich had been living together. While making an appearance on "The Morning Mash Up," the former Disney star admitted that living in quarantine "accelerated" their relationships as they were able to spend more time together.

Lovato told People that she and Ehrich were able to share a time that they would not usually get to spend. She added that those times spent together accelerated their relationship on a level that they couldn't explain to people. However, quarantine either makes or breaks the deal. "And it really made that. So I'm blessed, really fortunate, and continuing to count my blessings every day," Lovato said.

Kelly Clarkson Admits She Was Blindsided by Brandon Blackstock Divorce