The $2.6 Trillion US Latino market is the largest and fastest-growing in the American economy.

Co-Founder of L'Attitude, to a panel of world re-known economists and journalists, Sol Trujillo, said that the U.S. Latino market is "growing GDP at 8.6%, faster than China, faster than India, and nobody talks about it." 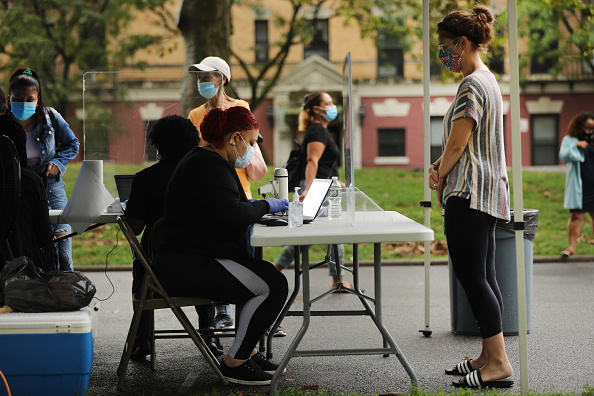 (Photo : Spencer Platt)
Sunset Park Neighborhood Of New York City Sees Uptick In Cases Of Covid NEW YORK, NEW YORK - AUGUST 13: People line-up to take a Covid-19 test in the Sunset Park neighborhood which has seen a spike in coronavirus cases in recent days on August 13, 2020 in New York City. City officials have sent numerous teams to the neighborhood, which has a large number of Latino and Asian residents, for both testing and to provide outreach to the community. New York Mayor Bill de Blasio announced on Wednesday that 228 people have tested positive for COVID-19 in the past two weeks.

The Latino community grew 4.5 times faster in terms of GDP when compared to the non-Latino U.S. cohort. This implies most of the U.S.growth from the Latino population. According to Forbes, if not for strong growth in the U.S.Latino market, the American economy would have contracted between 2017 and 2018.

Latino employees that enter the labor force offset declines amid the outgoing Baby Boomers. The growth in the U.S.economy is driven by an educated and young Latino labor force. The 78% of the net are Latinos' responsible from the new jobs in the labor force since the Great Recession, Latino Donor Collaborative reports.

Besides, in 2010-2018, Latino household growth was 23.2% compared to 3.8% for non-Latino households. This demonstrates the importance of the Latino community, not just today, but also in the economy's future, given the higher population of Latinosrelative to non-Latino demographics.

Despite the growth and size of the U.S.Latino market, it continues to be a big blind spot for many lawmakers in c-suite positions. Most Americans do not understand the potential and current contribution of the Latino market in the U.S. For example, the big misconception of the narrative involved education and Latinos, as per Fidel Vargas, the President, and CEO of the Hispanic Scholarship Fund. Vargas explains that most Americans respond that there are three Asian Americans in one Latino in college. But it is 2.5 Latinos for every Asian American, in reality.

Latinos are the most under-resourced and undercapitalized in the U.S. For instance, Latino businesses were disproportionately affected by the coronavirus pandemic and 50% less likely to receive relief from the government under the Payment Protection Program (PPP), unlike White-owned businesses, according to a report published by the Stanford Latino Entrepreneurship Initiative.

Beatriz Acevedo, CEO and Co-Founder of Suma Wealth, says, "We know that Latinas start the most companies, but imagine what they could do if they had the support, the access, the, capital and the mentorship."