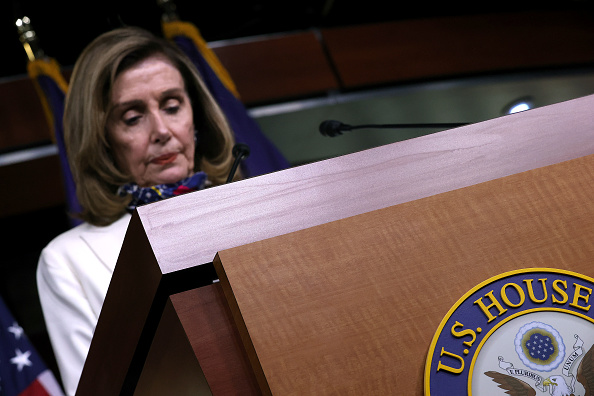 (Photo : Chip Somodevilla/Getty Images)
Speaker of the House Nancy Pelosi (D-CA) arrives for her weekly news conference in the House Visitors Center at the U.S. Capitol on October 01, 2020 in Washington, DC.

The blame game between Pelosi and Mnuchin casts doubt on whether the House Democrats and the White House will reach a stimulus deal even after next week's election.

According to The Washington Post, it started before dawn on Thursday. Pelosi dispatched a letter to Mnuchin listing multiple outstanding issues on the around $2 trillion stimulus deal.

Mnuchin was ticked off when he first learned about the letter through the media. Politico released it in its morning newsletter Playbook, publishing the letter shortly after 6 a.m. that day. But Pelosi's aides claimed they sent the letter to the Treasury Secretary shortly after midnight.

Mnuchin slammed the Speaker for sending the letter as a "political stunt" and shot back with his own account of the negotiations.

Mnuchin, who has led talks on behalf of President Donald Trump, said the House Speaker was simply refusing to compromise to get the aid that many Americans need right now, Washington Times reported.

He detailed the amount of time he's allotted for the talks in the administration's attempts to meet halfway.

"I have spoken with you almost every day for the last 45 days in an attempt to reach a serious bipartisan compromise," Mnuchin wrote in a letter.

He said Pelosi's letter "inaccurately describes the status of our current negotiations" and he felt obligated to release his own public response. He added that the speaker's "ALL OR NONE approach is hurting hard-working Americans" in need of financial aid.

In her letter to Mnuchin, Pelosi noted how divided the two parties are on details of a new stimulus bill and slammed the Trump administration for rejecting Democratic demands on several issues.

"The American people are suffering, and they want us to come to an agreement to save lives, livelihoods and the life of our American Democracy as soon as possible," Pelosi wrote.

With both letters released, it was clear that the two sides remain divided on a number of issues and hopes for a fresh stimulus deal continue to fade, noted CNN.

At this point, both sides of the negotiation are stuck in an "escalation of acrimonious finger-pointing over stalled virus-relief negotiations," said Bloomberg.

Both sides want to have a stimulus deal at the ready but couldn't agree on a price tag. Democratic leaders stand firmly behind their call for massive coronavirus aid, while Republican lawmakers want a small, targeted bill.

A clear stimulus agreement never came close, but both Mnuchin and Pelosi insisted that they were making progress with the bill. Sometimes, Americans would notice that this was the case. They held talks on multiple occasions discussing the language of the bill.

Previously, negotiators had hoped that a deal would be finalized before Election Day. But recent talks have proven it impossible.

Drew Hammill, Pelosi's deputy chief of staff, said it was "disappointing that the White House wasted time on this letter."

Pelosi said talks on the stimulus are not over. She is eyeing a lame-duck session after the elections to approve new aid.

Second Stimulus Check May Come in 5 Waves, Find Out Your Priority Group Here

© 2021 Latin Post. All rights reserved. Do not reproduce without permission.
Most Popular
Our Picks
In Other News
US News
Stepson of Jalisco Cartel Boss El Mencho Became One of U.S. Most Wanted Fugitives With $5 Million Bounty on His Head
US News
Court Allows Jalisco Cartel Boss El Mencho's Daughter, Laisha Oseguera, to Remain Free Despite Being Accused of Ordering the Kidnapping of 2 Soldiers
US News
Judge Allows El Chapo's Wife Emma Coronel Aispuro for a Fewer Restitution Payment a day After She was Sentenced 3 Years in Prison
Latin Issues & Immigration
Auto Insurance Requirements for Immigrants