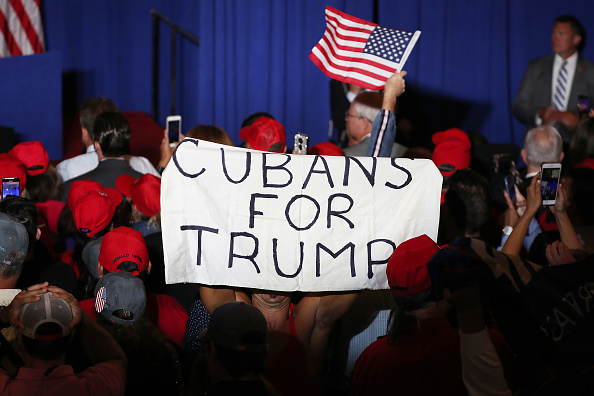 President Donald Trump picked up more Latino voters in key battleground state Florida than he did in 2016, said preliminary results of an exit poll.

Trump gave Florida intense focus during the entirety of his campaign, and as NBC News noted, the efforts paid off on Election Day.

Trump gained support from many Latino voters in Florida, especially from the state's most populous county, Miami-Dade.

As Vox pointed out, Trump has made significant inroads this election among Florida Hispanics.

In particular, he targeted gaining support from the Cuban-Americans who, when compared to other Latino voters, have historically been more Republican.

According to CNN, the president captured two in five votes among Latinos in the state, up from 35 percent in 2016.

On top of that, exit polls conducted by NBC News also showed 55 percent support for the president among the Cuban-American community.

Thirty percent of Puerto Ricans cast their vote for Trump, and 48 percent of "other Latinos" did the same.

Meanwhile, competitor Joe Biden performed significantly worse after earning only a little over half of the state's Latino vote.

Biden also lost support from Latino voters in Georgia and Ohio, which are also critical states in getting to the White House.

Even though he lost significant Latino support, Biden did make some inroads among seniors and independents in Florida.

He garnered a little under half of the voters aged 65 and older compared to 40 percent who went for Clinton before. Also, more than half of independents supported Biden in the state, higher than the 43 percent who supported Clinton.

Trump did not make much progress in gaining support from senior support in Florida. He had a little over half of the senior votes, compared to 57 percent in 2016.

Independent support also slipped for Trump, going down to 40 percent from the 47 percent he received in 2016.

The advantage in votes that Trump gained in Miami-Dade was a result of months-worth of courtship.

The president's campaign allotted time to erode Biden's margins in Florida, casting the Democratic pick as a socialist that will capitalize on the fears of Latinos, said Vox.

For example, Venezuelans were excited when, less than a month in office, Trump posted a photo of himself with Lilian Tintori, the wife of a leading opposition leader. Tintori was jailed at the time.

From that point on, he and Vice President Mike Pence made trips to make policy speeches in the state. He also ran Spanish-language ads as early as June.

Cuban-Americans make up a large chunk of the Latino electorate in Miami-Dade. But there are other Latino groups that also helped Trump meet his goal.

He noted that they knew about Cuban-Americans as they studied them intensely. But he said there was also a "five to 10 percent swing" among other South Americans, even Peruvians who make up a smaller part of the Latino group.

Venezuelan-Americans, while contributing smaller numbers, also shifted towards Trump. Nicaraguans and Colombians also made up important voting blocs in the country and showed increased support for Trump.