Both Trump and Biden ramp up for legal action as election results hang on razor's edge. 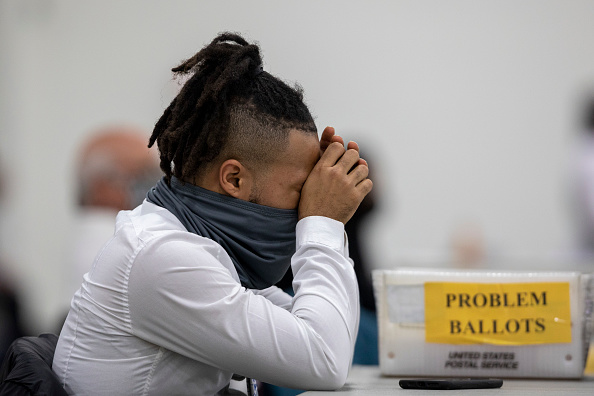 (Photo : Elaine Cromie/Getty Images)
A worker with the Detroit Department of Elections takes a break after sorting through absentee ballots at the Central Counting Board in the TCF Center on November 4, 2020 in Detroit, Michigan.

Here's a breakdown of where Trump's campaign plans to contest election results through legal action, and to what extent:

In Pennsylvania, there were multiple lawsuits filed. First, the Trump camp wants to stop all vote counting "until there is meaningful transparency."

Trump is on a three-point lead in the state, but thousands of votes are still pending counting.

On Wednesday morning, the Republican National Committee joined in filing a suit to appeal against the November 12 deadline of providing missing proof of identity for mail ballots.

According to Republicans, the deadline should be on November 9, reported NBC News.

The three-day extension was not part of new voting regulations in the state last year.

USA Today said in a report that absentee and mail ballots received after polls closed were to be segregated to allow for court challenges.

Another suit was also filed on Tuesday, claiming that Montgomery county officials illegally handled mail ballots ahead of Election Day.

Pennsylvania does not allow conducting an early canvass of ballots.

The state also doesn't have a process for fixing spoiled mail ballots, so the GOP plaintiffs argued that ballots should be thrown out. Lastly, there was also a GOP challenge over provisional ballots.

Read also: 3 Major Ways the Election Could Affect the Fate of Stimulus Checks

The plaintiffs sued the Secretary of State for allowing voters with defective mail ballots to cast provisional ballots. But there have been no reports of fraud or any ballot concerns in the state, according to Associated Press.

A suit was filed to stop ballot counting in Michigan.

The suit claimed that Secretary of State Jocelyn Benson was allowing absentee ballots to be counted without teams of bipartisan observers.

Jarvi added that there was a "robust system of checks and balances to ensure that all ballots are counted fairly and accurately."

According to the Nevada Supreme Court, "appellants have not demonstrated a sufficient likelihood of success to merit a stay or injunction."

District court didn't side with the appellants as well because it lacked "evidentiary support." But the case was not yet dismissed, and an expedited review of the case was granted.

Meanwhile, Trump's legal team also wanted to enforce the state's election laws that state absentee ballots received after 7 p.m. on Election Day should not be counted.

Instead, these ballots have to be stored in a way that prevented intentional counting.

Georgia law also requires late absentee ballots to be stored until eventually getting destroyed along with other ballots.