Trump's Key Strategy to Winning Latino Voters, and Why Biden Has Failed to Woo Them

The result of the U.S. Presidential election remains unpredictable, but one thing is for sure: Pres. Donald Trump has successfully won the support of Latinos across the country. 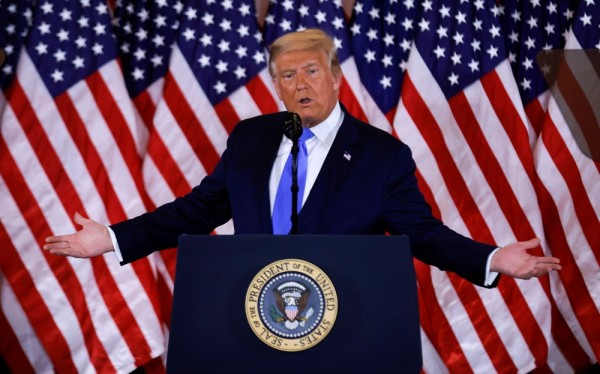 (Photo : Reutersconnect)
U.S. President Donald Trump speaks about early results from the 2020 U.S. presidential election in the East Room of the White House in Washington, U.S.

Trump and his administration have always been supporting Latinos and other immigrants across the country through job employment, healthcare, and financial assistance amid the pandemic.

He also held different conventions with the Latino and Hispanic community leaders at the White House earlier this year.

It has been projected before by other news outlets and surveys polling groups that presidential candidate Joe Biden would win the support of the Latino community. But during the election day, it turned out that the majority of the largest minority group in the country supported Pres. Donald Trump.

Millions of Latinos and Hispanics in key states like Florida and Texas supported Pres. Trump. It is an irony compared to what happened four years ago where Latinos supported former Democratic presidential candidate Hillary Clinton.

However, this time, it seems that Latinos show lukewarm enthusiasm towards Democratic Presidential candidate Joe Biden.

Many activists, legislators, and political operators have already warned the campaign team of Joe Biden that their efforts to court the Latino and Hispanic communities are not enough.

In fact, Trump ran more political ads using the Spanish language to easily reach out to the community and had created also a 'Latinos for Trump' coalition to gain the support of the community.

Where the Democrats failed

Joe Biden's failure immediately caught the attention of some Democratic members of the party. Congresswoman Alexandria Ocasio-Cortez said that she will not give too many details about the results but she had also warned the vulnerability of the party among the Latino community.

She also added, "There are strategy and a path, but the necessary effort simply hasn't been put in."

According to the 2020 American Election Eve Poll, the majority of Latinos who participated in the election this year has four priorities. These are the government's response to the global pandemic, healthcare costs, jobs, and economy.

NBC News said that the majority of the Cuban-Americans supported and voted for Pres. Trump. This just means that the strategy of Trump's campaign committee painting Biden as a socialist was effective.

It can be remembered that the Latin Post reported that Cubans and Venezuelans living in the U.S. were more likely to support Pres. Trump.

Presidential candidate Joe Biden also lost in Texas where Democrats once hoped that they could turn the red state into the blue. South Texas's Nueces county voted for Pres. Trump by a wider margin compared to the 2016 election. Even though Republicans regained control in South Texas, it is still not clear if other demographics

In the Rio Grande, where Hillary Clinton dominated in the 2016 Presidential election, Joe Biden also lost. Trump led and won by only a five-point margin in Starr County which is composed of 96.4 percent Latino or Hispanic. Hillary Clinton also won in the country in 2016 by 60 points, according to a published article in The Guardian.