The Trump campaign put forward statements from a Nevada witness, saying the memory disks of voting machines were altered to have different totals overnight.

The witness' claims were brought by the Trump campaign during an evidentiary hearing in Carson City, Nevada on Thursday.

Jesse Binnall, an attorney for the Trump campaign, presented the evidence in court on behalf of the campaign team. The witness remained anonymous as they were shielded by a protective order.

According to them, the vote tallies from the machines were collected at the end of the voting day and stored on Universal Serial Bus (USB) drives overnight, reported Epoch Times. 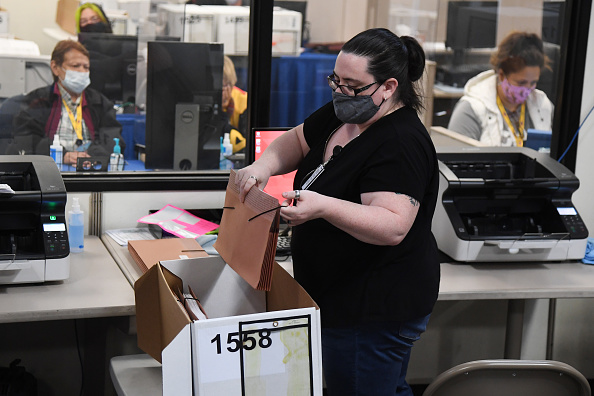 Binnall explained that the disks, which had serial numbers on them, were logged in and out numerous times with varying numbers on it.

"What that means is that literally in the dead of night, votes were appearing, and books are disappearing on these machines," he added.

The USB drives were also not encrypted, and the voting machines did not have passwords, so he believes the machines had been "compromised."

The claim of voter alteration was the first of its kind within the Trump campaign during its six-state effort to challenge the results of the 2020 election.

Binnall also presented another worrisome claim during the hearing.

One of the core aspects of the Nevada legal challenge was doubts on the casting of ballots.

According to CBS affiliate KLAS-TV, the lawyers are specifically trying to overturn the Nevada certification with evidence of deceased people voting and some voters casting their ballots twice.

They claimed that roughly 40,000 people voted twice and that some 1,500 voters are actually dead.

The campaign also argued that around 130,000 ballots had signatures verified solely by a machine, a contravention of Nevada's election law.

Last week, these electors had already been directed by the state's Supreme Court and Governor Steve Sisolak to cast their six votes for Biden.

Judge James Russell did not give his decision on the matter Thursday.

According to The Nevada Independent, the Trump campaign's legal challenge on the presidential election will instead be decided Friday.

Russell wanted to have more time to review the evidence presented during the evidentiary hearing.
He asked the Trump campaign and the state's Democratic electors to prepare a proposed order by 10 a.m. on Friday.

He also wanted to give any of the parties some potential to appeal their case to the state's Supreme Court.

"Given the nature of the court to this decision, the court would like to review the evidence provided in light of the arguments made," he said Thursday. "I mean, both of you have alluded to certain evidence in the record which I would like to verify."

The Trump campaign asked to affirm the legal challenge, saying Nevadans were "disenfranchised" during the election period.