Trump Repeats Claims of Fraud as Pennsylvania, Nevada, Georgia Side With Biden 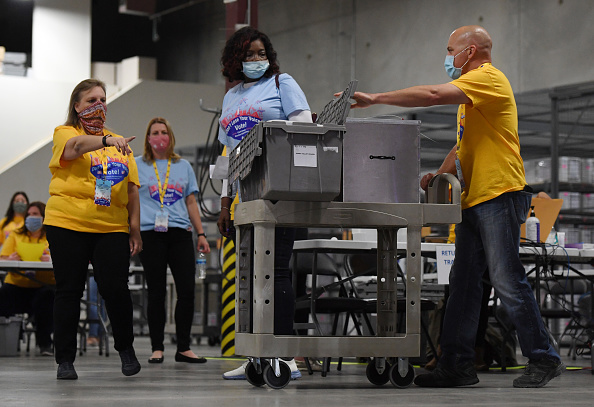 Pennsylvania, Nevada, and Georgia ballots are starting to give more solid footing for Democrat Joe Biden, but President Donald Trump repeated claims that votes are being stolen from him.

Pennsylvania was one of Trump's centerpiece hope states for a second term, but the current stream of mail ballots show that Biden is slowly gaining an edge, said Vox.

Election officials and experts project the tally could be finished in Pennsylvania by Thursday, though it may be longer given the surge in mail ballots this year.

The same trend also goes for Nevada, where Biden maintains a slight lead of 12,000 votes more than Trump, said FOX 13.

Mail ballots also helped Biden's favor in Georgia, now with only about two percent of all votes left to be counted.

As noted by the New York Times, more mail ballots carried Biden's name and pushed the margin against Trump closer as the third day of counting came.

NBC Philadelphia said that as of Thursday, Trump was leading 78,000 votes with 300,000 more ballots pending on the count, according to the state's official election tally.

Experts believe the remaining votes will likely side with Biden. Estimates vary, but there may be about half a million ballots that still need to be counted.

Other than the fact that the remaining votes will be from mail ballots, they also come from largely Democratic areas.

These factors give Democrats huge margins since Democratic voters are more likely to cast their ballots through the mail.

On the other hand, while Biden does hold a slight lead in Nevada, there are still some 50,000 ballots that need to be counted in Clark County alone.

As more ballots get counted, Biden's campaign manager Jen O'Malley Dillon told The Hill that she is confident that Biden can hold the lead in Nevada.

She also remains hopeful that their campaign team can gain a large enough share of votes to declare victory soon.

In Georgia, yet another state the president can't afford to lose, Biden's mail-in ballot advantage also pulled him up to less than 4,000 votes apart from Trump, reported another CNN article.

Amid all this, Trump repeated his allegations that Democrats are trying to "steal" the election, reported CNN.

He insisted that counting "legally cast ballots" would show him winning the presidential election on Thursday. He alleged that he was being deprived of the presidency through fraud.

CNN noted that the president did not provide evidence for such claims.

Apart from the dwindling lead in Pennsylvania, his lead in Georgia was also running small. So, even though Trump can retain a path to 270 electoral votes, the chances are starting to get smaller.

Trump's campaign has also promised legal action in states that he has been seeing an apparent loss like Wisconsin and Michigan and states that he is losing like Georgia, Arizona, and Nevada.

Votes from Biden-friendly places like Philadelphia and Chester County are expected to still come in throughout the day. On the other hand, swing counties like Bucks are starting to break for Biden, said Vox.

On Wednesday, it became clear the Trump's lead was shrinking as more ballots from Democratic areas were counted. The trend was even expected to continue on Thursday.

There was a temporary halt that occurred in Philadelphia shortly before Thursday noon because of a court ruling.

It ordered that observers from the Trump camp must be given greater access to the convention center where ballots were being tallied. The vote count was only halted shortly, getting back on track by 12:15 p.m.

Biden's overwhelming advantage in the state started giving his campaign optimism that he will eventually overtake Trump. But it isn't truly known until all votes are actually counted.

Despite the shrinking margins, Trump's campaign is still hopeful that the lead will hold.