Pres. Donald Trump wants Congress to include $1,200 direct stimulus checks in the second round of the relief bill. Trump has long been asking Congress for this measure even before the election. 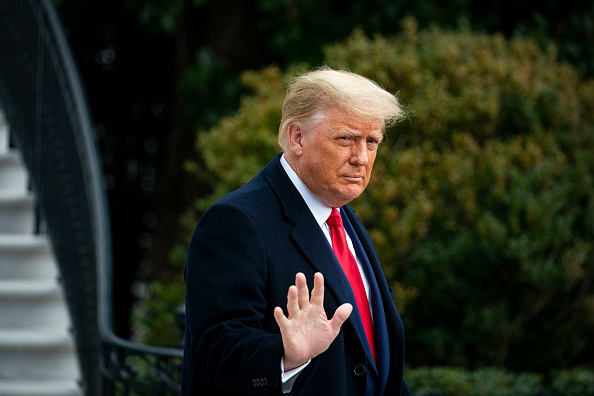 (Photo : Al Drago/Getty Images)
President Donald Trump waves as he departs on the South Lawn of the White House.

Pres. Donald Trump has always been very vocal about the second round of stimulus package that includes $1,200 stimulus checks. Even before the election, his administration tried to seal a stimulus deal with the Democratic negotiators but their offers were rejected.

Recently, a bipartisan group from the House of Senate proposed a $908 billion relief bill that includes a $300 weekly unemployment benefit but does not include any amount for direct stimulus checks. The proposed relief bill was an inch closer to seal the deal.

However, Trump's administration offered $916 billion that includes $600 direct stimulus checks intended for millions of Americans but removed the weekly unemployment benefit. This is where another disagreement started that stalled the relief negotiation again.

According to Business Insider, Trump is spending his final weeks in office urging Congress to include another round of stimulus checks in the next relief package.

Trump also said that he wants stimulus checks to be approved for "more money" than the options currently on the table.

During an interview which was aired on Fox on Sunday morning, Trump said, "I'm pushing it very hard, and to be honest with you, if the Democrats really wanted to do the deal, they'd do the deal. Right now, I want to see checks - for more money than they're talking about - going to people."

After months of stalemate due to Democratic Leader House Speaker Nancy Pelosi's rejection of Trump's stimulus package offer, his administration is now back and offered a relief bill that includes direct stimulus checks.

This has always been Pres. Trump's top priority even before the election.

The proposed $908 billion relief bill is lower than Pelosi's previous $2.2 trillion demand and twice smaller than the $1.8 offer of the White House.

It can be remembered that one of the reasons why Pelosi rejected the previous offer of White House is because of the amount of the package.

Joe Biden has also touted during the election campaign period that he will give a bigger stimulus package once elected president.

Meanwhile, Biden expressed his support towards the proposed $908 billion after top Democratic leaders indicated their support in the relief bill.

However, Biden said that the proposal was intended to be a compromise between the two parties. He also committed that he will give the stimulus package he promised after his inauguration on Jan.

If the $908 billion relief package that does not include stimulus checks passes the House of Congress and Senate, McConnell said that Trump will not sign it.

Earlier this month, the Republican Senate leader said, "At the risk of repeating something we all know, making law will require not just the Senate's approval, but also the signature of the President of the United States."