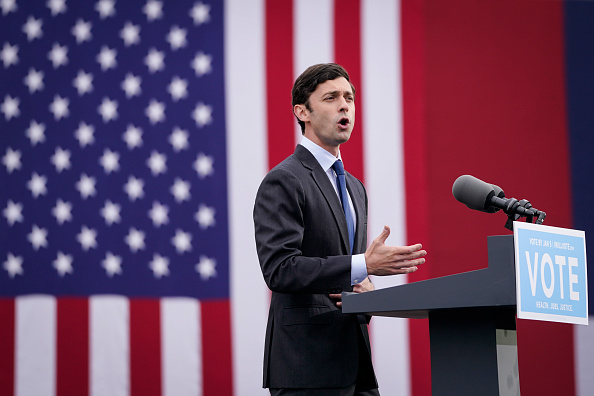 "We need to protect our Dreamers," Ossoff said, promising path to legal status for migrants.

Dreamers, DACA recipients, are every bit as American as any of us.

I will have your back in the Senate. pic.twitter.com/CuQ6UB0TWb

He pointed to the agricultural sector in the state, particularly the "campesinos who work in the fields, enduring some of the most brutal conditions of labor anywhere in this country to keep America fed."

Ossoff promised that once federal agents arrive at these farms, it would be to make sure migrants were working in human conditions and paid the minimum wage.

While the promises seem good for the crowd Ossoff was talking to, it did not sit well with Mark Krikorian, the director of the Center for Immigration Studies.

He said when he heard the use of "campesinos," translated to peasant," during the speech he felt "revulsion," especially since Ossoff was specifically talking about people working in the country during that part of the speech.

Krikorian told Breitbart that he was affected by the term "campesinos" and what it stands for.

What Made Krikorian Affected by the Use of 'Campesinos'?

Lexico defined "campesino" as "a peasant farmer" Often, the word had an informal, derogatory ring to it.

"This is the acknowledgement and even the celebration of the importation of a subordinate class [of people]," he said.

He added that while many things were debatable about the U.S., it was clear to him that the country did not have peasants.

For Krikorian, Ossoff's words mean the importation of a foreign country's peasant class, and found the prospect "appaling."

"What Ossoff is saying is that a post-industrial, knowledge-based, continental nation like ours cannot survive without the importation of a foreign peasant class," he said.

For Krikorian, this is also the case, saying a "trust fund socialist" like Ossoff would be the type of person to call farmworkers "campesinos."

In the video, Ossoff insisted that illegal migrants were "every bit as American as any of us."

But Krikorian said this wasn't a form solidarity from the Democratic candidate.

"He is virtue signaling his solidarity with the oppressed while viewing them in a sense as less than human," he said.

According to Heavy, Ossoff's father runs his own publishing company, Strafford Publications.

It started off as a newsletter publishing company that later on expanded on webinar-based education programming for some professionals.

Meanwhile, his mother was the founder of the political action committee New Power PAC.

The Georgia Senate runoff is set on January 5.

It will determine if President-elect Joe Biden will be starting his term with a divided Congress-with Democrats in the House and the GOP in the Senate-or a unified one.

If Ossoff and Rev. Raphael Warnock win, Democrats will be secured a 50-50 split in the Senate.

Ties will then be broken by Vice President-elect Kamala Harris and Democratic agenda might be pushed further on the table.

But if Republicans Perdue and Kelly Loeffler win, the Republicans could put a halt to some major legislation.