A bipartisan group of Senators who introduced the $908 billion relief bill will introduce the bill tomorrow night, Monday, and determine if it will have the support of lawmakers or not. 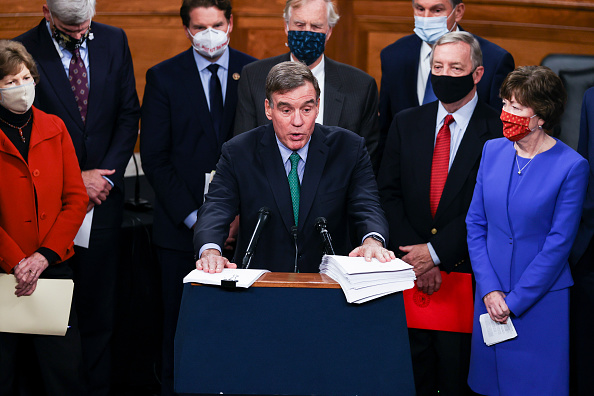 (Photo : Tasos Katopodis/Getty Images)
Sen. Mark Warner (D-VA) speaks alongside a bipartisan group of Democrat and Republican members of Congress as they announce a proposal for a Covid-19 relief bill on Capitol Hill on December 14, 2020.

The next round of relief aid is still uncertain until today, but the bipartisan group of Senators, who proposed the $908 billion relief bill, is fully decided to introduce the bill in the House of Senate.

Both the House of Senate and Congress have one week or until Dec. 18 to vote for another round of relief bill before the year ends. If they cannot come up with an agreement before the deadline, that means that struggling Americans will have to wait for another session next year.

However, the members of the bipartisan group is fully decided to introduce to bill it is either it will have the support of lawmakers in the House of Senate or it if it will pass in the House of Congress.

Republican Sen. Bill Cassidy said on Sunday, "We're going to introduce a bill tomorrow night. What Leader [Mitch] McConnell decides to do, I don't have control over. I only can do what I can do."

According to CNET, the Democratic and Republican lawmakers have worked over the weekend in an effort to come up with an agreement on COVID-19 relief measures that they want to deliver before the year ends. But their proposal is more likely not to face a warm welcome.

There are issues that White House want to sort out in the proposed $908 billion and that includes the exclusion of direct stimulus checks.

However, for the bipartisan group who worked on the relief bill, they said that this the time that everyone must unify and not to dig in heels.

House Majority Leader Steny Hoyer said Sunday, "We must act. It is irresponsible that we have not acted to date. It is absolutely a failure of the Congress. We want to get aid out to people who are really, really struggling."

Biden's Plan After His Inauguration

President-elect Joe Biden expressed his support over the relief bill after the top Democratic leaders indicated that they will support the $908 billion relief package as a compromise agreement. Additionally, the President-elect also said he that he will give a larger amount once he enters the White House.

According to the president-elect, the relief package will not be the 'total answer' once it gets passed. Despite that, Biden signifies its importance in setting the benchmark for his administration's priorities.

Democratic Sen. Joe Manchin also said on Fox News Sunday: "We've been meeting day and night for the last month. We were on a call all day yesterday. We'll get on a call this afternoon to finish things up. There is no way, no way, that we are going to leave Washington without taking care of the emergency needs of our people. And that's all of our country."

© 2021 Latin Post. All rights reserved. Do not reproduce without permission.
Most Popular
Our Picks
In Other News
World
Mexico: Mass Grave Filled With 10 'Tortured' Bodies Found After Authorities Receive an Anonymous Tip
US News
Gunmen Stormed a Hotel in Mexico and Kidnapped 38 Guests, Including 22 Foreigners
US News
USCIS New Rule: Migrants Applying for U.S. Citizenship Must Show Proof of COVID Vaccines
US News
Juarez Cartel Boss Vicente Carrillo Fuentes Sentenced to 28 Years in Prison by Mexico Judge