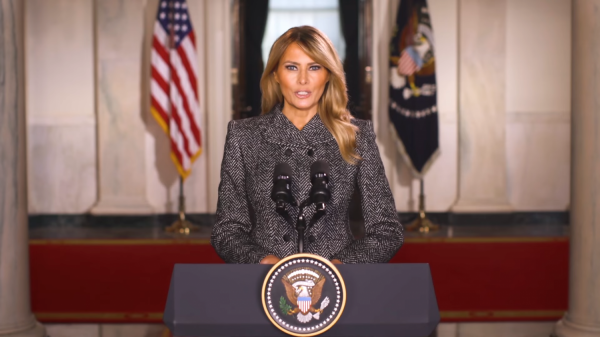 Melania Trump, the nation's outgoing First Lady, defended her legacy as she reflected on her four years in the White House during a farewell message on Monday.

During the nearly seven-minute-long farewell message, Trump called the past years the "greatest honor" of her life, two days before her husband President Donald Trump officially steps down.

Trump used the farewell message as an opportunity to highlight her work in leading the "Be Best" campaign which sought to address the well-being of children by protecting them from cyberbullying, opioid abuse and other challenges.

She encouraged people to do everything possible to ensure success of the next generation of Americans, said a report from NBC's Today.

She also thanked military service members, law enforcement workers, caregivers and other inspiring figures she met since entering the White House in 2017.

"I think of all the people I have taken home in my heart and their incredible stories of love, patriotism, and determination," she said.

Looking back at all the people she met along the way, Trump said it had been humbling to "represent a nation with such kind and generous people."

The First Lady also posted the video to her address on Twitter, a social media site where her husband was recently banned.

She thanked the health care workers, military and law enforcement officers who were at the frontlines in the middle of the crisis.

Grieving the lives lost due to the pandemic, she also urged "caution and common sense" among Americans to protect those vulnerable to the virus as vaccination efforts continue in the country.

She also recognized the efforts of civilians who helped each other amid the pandemic.

"In the midst of this hardship, we have seen the best of America shine through," she said, citing efforts of students to make cards and deliver groceries to the elderly and the struggle of teachers who work hard to educate children during the trying time.

Even though the First Lady urged people to continue being passionate about the things they believe, in she added that "violence is never the answer and will never be justified."

Trump did not make any direct mentions of the January 6 Capitol riot due to relentless claims that the election was "stolen."

Five people died from the incident, one of them a Capitol Police officer.

She had previously said that she was "disappointed and disheartened" by the violence but called out gossip and "misleading accusations" about her.

First, Melania Trump is reportedly set to become the first modern First Lady who won't be welcoming the incoming First Lady for a tour of the White House living quarters, reported Al Jazeera.

Instead, President Trump will be giving the farewell address at 8 a.m. local time on Wednesday before a sendoff ceremony outside Washington.

A full transcript of the farewell address can be read on the White House website.

© 2021 Latin Post. All rights reserved. Do not reproduce without permission.
Most Popular
Our Picks
In Other News
US News
Lebron James Vs. Isaiah Stewart Update: LA Lakers Star Says It's Accidental—Suspension Actually Not Needed?
US News
Dominican Republic Intercepts Speedboat Carrying 705 Kilos of Cocaine, Arrests 4 Including a Venezuelan
US News
8 Men Found Dead in Brazil Mangrove Were Stabbed, Beheaded, Genitals Mutilated After Police Operation Against Drug Gangs
US News
Biden Admin to Restart Donald Trump's 'Remain in Mexico' Policy 'as Soon as Next Week'