'Traitors Get Shot': Texas Man in Capitol Riot Threatens to Shoot Children If They Turn Him In 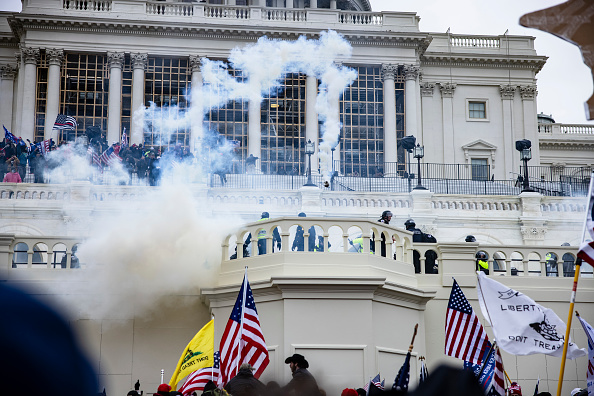 A Texas man in the January 6 Capitol riot was arrested after he allegedly said threats of shooting his own children if they turned him in to authorities, court documents said Monday.

The Texas man was identified as Guy Reffitt, 48, from the city of Wylie.

He allegedly took his gun with him when he participated in the Capitol riot.

The FBI found the Texas man's firearms in his house and charged him with unlawful entry, reported New York Post. Reffitt said he took part in the Capitol riot "to protect the country," a report from Houston Chronicle said.

"If you turn me in, you're a traitor and you know what happens to traitors. Traitors get shot," his wife recalled him saying.

Read also: Trump Impeached by House for Second Time With 10 Republican Members Voting Against Him

He was also charged for obstruction of justice for saying these statements to his family, NBC Dallas Fort-Worth added. He remained in federal custody on Monday.

Reffitt was arrested on January 16, Saturday. He was among the several people who have been arrested by the FBI over the past few days over accusations of them being in the chaotic intrusion in the nation's Capitol.

An affidavit obtained by NBC News said an FBI agent described Reffitt as an apparent member of a militia group called "Texas Freedom Force". The extremist group travelled from suburban Dallas to the Capitol in Washington.

He posted a comment on the website for "Texas Freedom Force, a militia extremist group," using his own cellphone number in October using the same cell phone number.

Brandon Burkhart, the president of "This is Texas Freedom Force," said Reffitt did sign up for the group in June 2020 but did not attend any of their meetings or rallies. He also disputed the FBI's characterization of their group.

Scanning through a news video of the Capitol riot, the FBI confirmed that he did participate in the violent event as the footage showed a man flushing out his eyes after apparently being pepper-sprayed. He was seen wearing a black helmet and tactical vest.

Texas Man Says He Went to Capitol Riot, But Stayed Outside

Reffitt's son added in an interview with the FBI that his father recorded the events during the Capitol riot using his GoPro camera that was attached to a helmet.

Footage from Reffitt's cellphone further proves that he was at the mob, the FBI said.

The affidavit also said Reffitt made threats to "put a bullet through" his daughter's cellphone if she recorded or posted about his comments on the riot on social media.

His wife said the man was prone to delivering such "extreme" statements but she didn't believe he would act on his words.

It is unknown whether Reffitt has a lawyer and a message from a phone number under his name has not immediately returned comment on accusations against him.

© 2021 Latin Post. All rights reserved. Do not reproduce without permission.
Most Popular
Our Picks
In Other News
World
500 Packages of Cocaine With Liverpool FC Branding Bound for Brazil Seized in Paraguay
Sports
NBA Fines LeBron James $15,000 for 'Obscene Gesture' During Lakers-Pacers Game, Warns Him Over Profane Language
Sports
Ben Simmons Might Have to Return to Philadelphia 76ers as He Goes 'Broke' Due to Outrageous Spending Habits, Hefty Fines
Sports
Warriors’ Stephen Curry Expresses Dissatisfaction With Steve Kerr’s New Rotation Pattern