"Friends" is one of the most popular TV series since it is quite different from other shows, focusing on various individuals' romantic sides.

I can’t stop laughing at this pic.twitter.com/u3IRO9IiyX

These include Jennifer Aniston, David Schwimmer, Matt LeBlanc, Lisa Kudrow, Matthew Perry, and Courteney Cox. Because of their chemistry, many fans and magazines tried to predict their old looks once they come of age.

However, this viral 2004 magazine took it to the next level after using Adobe Photoshop to show how the casts in "Friends" would look like years later. But, the article's prediction is way off, making it viral on Twitter.

According to Huff Post's latest report, one of the "Friends" fans was able to find the viral 2004 magazine, which tried to predict how the actors would look like 20 years after the show ended.

"I can't stop laughing at this. Computer Magic," said Patrick Lenton, a freelance journalist and author, via his official Twitter post.

His tweets were able to generate more than 800 likes and attracted a lot of loyal fans.

"Have superimposed what they actually look like now. Scarily accurate," said one of "Friends" fans in the comment section. 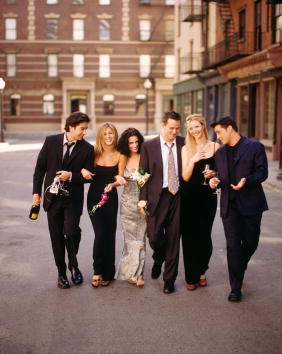 READ MORE: Ben Affleck Spotted Looking at Rings in Tiffany & Co.: Is He Getting Engaged Again With Jennifer Lopez?

On the other hand, Yahoo Sport released the latest photo of the casts to show that the viral magazine's prediction is just way off.

Aside from the popular TV series actors, various magazines also tried to predict the old looks of other celebrities, singers, and actors, including the "King of Pop," Michael Jackson.

Another commentator on Lenton's Twitter post replied a photo of a 2000 Micheal Jackson prediction, showing that the pop singer would grow his beard and will retain his original skin color.

This one is my all time favorite: pic.twitter.com/1FO8q7XBzp

Of course, this prediction is still inaccurate since the world knows that the artist underwent various surgeries to make his nose smaller. He even changed his skin color to have a more American look.

Jennifer and David are Dating?

According to Micky's latest report, Jennifer (Rachel) and David (Ross) went out on a romantic getaway at Napa Valley. Some fans are now excited since these two Hollywood stars played the roles of the main couple in "Friends."

On the other hand, the actor and actress were already reportedly joking around about dating each other. However, various sources already debunked the rumor since there were no photos of the two together in Napa Valley.