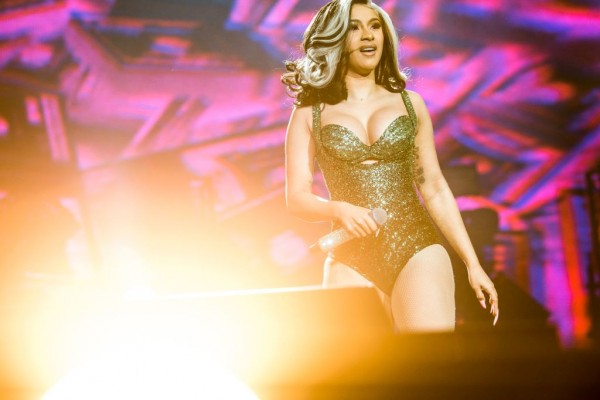 (Photo: HELLE ARENSBAK/AFP via Getty Images)
American rapper Cardi B performs during the Roskilde Festival on July 4, 2019 in Roskilde, Denmark.

Rapper Cardi B is one of the leading artists in the 2021 BET Hip Hop Awards, as the "I Like It" singer bagged at least nine nominations from different categories.

Cardi B dominating this year's BET Hip Hop Awards came as the award-giving body announced the official roster of nominees on Thursday.

Along with the "Please Me" rapper, Meghan Thee Stallion and Drake were among the artists who topped this year's BET. Stallion also gathered at least nine nominations in different categories, while Drake follows the two rappers with at least eight nominations.

It can be recalled that the "Bodak Yellow" rapper also lead the 2019 Hip Hop Awards, as she received at least 10 nominations.

READ NEXT: Cardi B Reacts to Celebrity Showering Debate: 'It's Giving Itchy!'

Cardi B's "Up" and her collab music "WAP" with Meghan Thee Stallion garnered most of the nomination for the Bronx rapper. Both songs mentioned were nominated for BET's song of the year, best hip-hop video.

Cardi B's artistry also gained traction in the 2021 BET Hip Hop Awards, as the "Money" singer was also nominated for the categories hip hop artist of the year, best live performer, and hustler of the year.

Meanwhile, Meghan Thee Stallion went neck-to-neck with Cardi B, as she was nominated for almost all the categories the "press rapper" was nominated to, including best live performer, hip hop artist of the year, and hustler of the year.

Apart from Stallion, Cardi B will have to battle Drake, Lil Baby, J. Cole, Tyler, the Creator, Doja Cat, DaBaby, Busta Rhymes, Saweetie, and Yung Bleu for the solo categories of the BET Hip Hop Awards.

The announcement of Cardi B's nomination happened days after the rapper gave birth to her second child on Saturday.

The rapper took to Instagram to announce the news as she posted a snap of her, her husband, and the baby wrapped in a towel on her arms. In the picture, Cardi and offset sat under a Louis Vuitton blanket as they gaze upon the new addition to their family.

In a statement provided by the rapper's representative, the "Thru Your Phone" singer said that they were overjoyed when they finally met their son.

"He [the baby] is already loved so much by family and friends and we can't wait to introduce him to his other sibling," the rapper said.

Cardi B's son is the second child she shared with Offset, as the couple was also the parents of Kulture, who is now three years old. Meanwhile, Offset is also the father to three other children from his previous relationships.