Salma Hayek's Journey Through Hollywood, From Dusk Til Dawn to Being Attacked by a Monkey 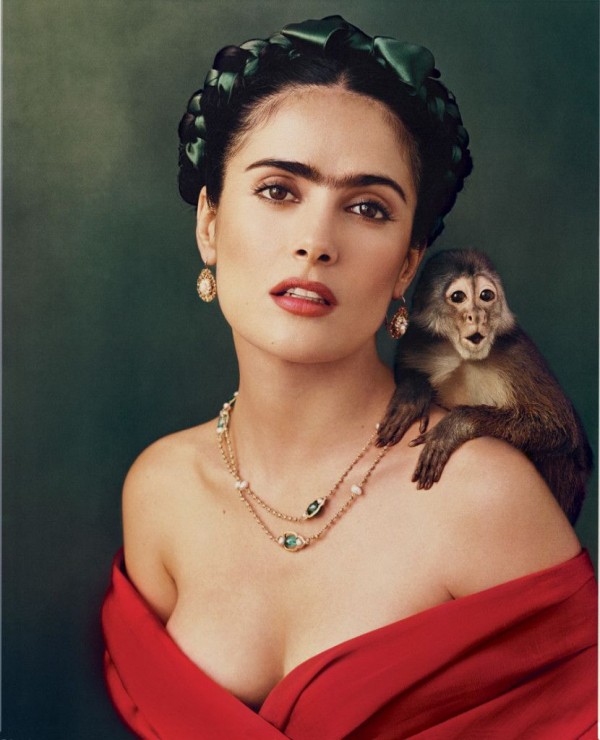 Salma Hayek, the most influential Latina, left severely injured after she was attacked by a monkey during the filming of Frida, according to a published article in We Are Mitu.

Salma Hayek is a Latina Hollywood veteran who is loved and adored by the Latino community. Her influence in the film industry, and her representation of Hispanics can not be ignored.

A talented, smart, opinionated, hilarious, feisty, and beautiful inside and outside is how everyone describes her when asked about Salma Hayek. It would also be a big achievement to see more Latinas being seen on the red carpet and showing the world that Latinos and Latinas can make a big impact in the entertainment industry due to the actress's popularity.

Hayek has a new book about fashion and will star in the new film "Like A Boss." A video was released by Vogue that showed the journey of Hayek from the moment she stepped on the set of "From Dusk Til Dawn".

The most interesting part every time we speak about Hayek is her genuine fashion, her determination in choosing her style of fashion, and the way she expresses herself without taking the advice of others. Her ways were not taken seriously at first but it changed quickly because Hayek is not your average Holywood star. Just her beauty alone would tell a lot.

The first Vogue photoshoot of Salma Hayek in 2002 was an event she recalled while looking at a picture where she emulated the role of Frida Kahlo alongside a monkey.

In an interview, Hayek said: "I was very proud to be part of Vogue for the first time in my life and this monkey, who was named Tyson, actually attacked me during the filming of Frida, and I was severely injured."

Hayek said jokingly that after the monkey attacked her years ago that she is still willing to work with Tyson again in a new movie, but she's just hoping that Tyson won't attack her face. Meanwhile, it seems that the monkey in the picture was also stunned and looked shocked that he will work with Hayek again after what happened. The monkey was just so lucky that he was not sent back to the zoo.

Some other parts of the video shows how Hayek set her fashion and that she was the original Ariana Grande. In 1996, she attended the MTV Movie Awards where she was nominated for Best Kiss. She also discussed her fashion sense in the late 90's and dark lipstick with a tight black dress, but the real highlight for her was that everyone loved her ponytail.

Her journey to Hollywood wasn't easy. She said that during her time, no one would wear a tiara and no one wanted to dress a Mexican because you will not last in the industry. However, she proved it wrong. She wore a dress with a tiara though her entire team told her not to. Hayek said that she is very proud of herself and her genuine fashion.