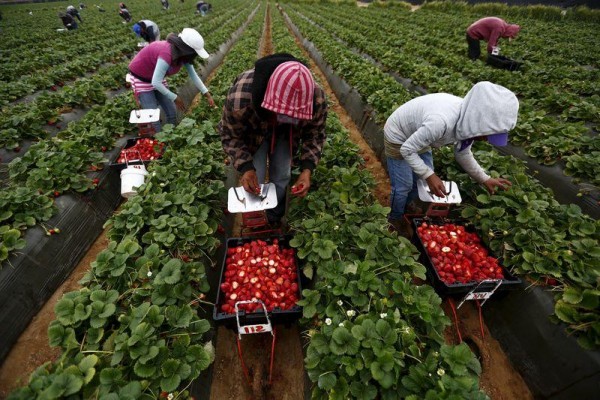 Hundreds of thousands of seasonal farmworkers, mostly Mexicans, enter the United States using H-2A visas to make sure that there is enough food amid the threat brought by COVID-19 according to a recently published article.

MEXICAN FARMWORKERS IN THE UNITED STATES

Hundreds of thousands of Mexican farmworkers are arriving in the Mexican city of Monterrey to pick-up their H-2A visas at the U.S. consulates for temporary agricultural workers. They are bound to the different farms in the United States.

While hundreds of thousands of Mexican farmworkers are working hard to ensure that there is enough food chain in the U.S., many Americans are in their home to avoid COVID-19.

The agricultural industry is the backbone of the U.S. economy and Mexican farmworkers are playing a big part in it. They are the main workforce of the country's agricultural sector. In fact, there were around more than 250,000 who came to the U.S. last year using H-2A visas and the majority of them are Mexicans.

According to Justin Flores, AFL-CIO's Farm Labor Organizing Committee Vice President, that he spoke to different people who plan to travel in North Carolina, Kentucky, Michigan, Mississippi, and more to support the agricultural industry of the country.

The efforts of the Mexican workers to work in the United States as farm workers to sustain the food chain of the country amid the threat brought by COVId-19 illustrates the paradox in the country. Mexicans work, while Americans stay at their home.

U.S. embassy in Mexico has announced already that they are suspending for the meantime the non-emergency visa appointments because of the health concerns of their employees and visitors.

However, they also notified the Mexican farmworkers who participated in the program last year that they can still get their H-2A visas and they don't need to have an in-person appointment at the consulate.

With the notification and announcement from the embassy, it is expected that around 85 to 90 percent of workers from the Pacific Northwest will be exempted according to the Director of Wafla, Ryan Ogburn.

Moreover, influential farm organizations in the United States are also asking President Trump and his administration to ease the entry of farmworkers from another country. Through this, they can assure that there will be enough food in the coming days as the country is still facing COVID-19 pandemic.

FOOD SUPPLY IN THE COUNTRY

According to the food producers that their operations are still normal for now. Even though, consumers are prowling the half-empty shelves at the different supermarkets.

Meanwhile, slaughterhouses, dairies, and vegetable food producers assured that they are open for business and are ready to feed the nation. In a statement released by the President of the National Pork Producers Council Howard Roth, he wrote: "telecommuting is not an option for us; we are reporting for work as always."

Food distribution in the midst of COVID-19 pandemic has also redirected from shuttered businesses to places where people crave for it specifically in the grocery stores. Mexican farmworkers are sacrificing their health just to make sure that they can help sustain the food chain in the U.S. and that they have something in return to feed their families.