[VIDEO] Exploring Mexico: The Rise of Exorcism and The Cult of 'Bony Lady' Santa Muerte 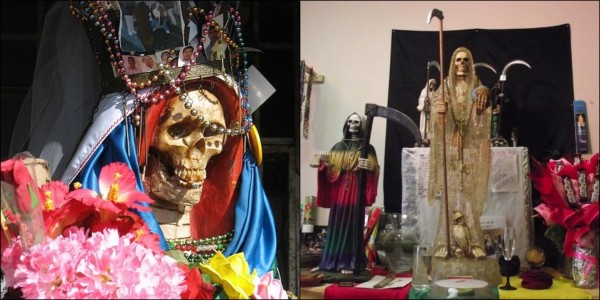 There's a God, and there's a Devil. Most people believe they reside in the Heavens and the Pits of Hell. The Catholic Church, however, believe they are fighting a war in Mexico.

Exorcism is a sacramental practice observed by the Catholic Church since 1614. The practice has been around since ancient times. The concept of possession and exorcism takes from prehistoric shamanistic beliefs which were observed in Western society and ancient Chinese culture.

According to the law of the Catholic Church, an exorcism can only be performed by ordained priests with permission from the local bishop. The ritual is considered a dangerous task and involves prayers, blessings, and invocations from the sacred document Of Exorcisms and Certain Supplications.

The practice has received much popularity over decades; so much so that it was performed on an entire nation---Mexico.

In May 2015, renowned Spanish exorcist Jose Antonio Fortea, along with Cardinal Juan Sandoval Iniguez and several trained exorcists, performed the Exorcismo Magno or Great Exorcism on the entire nation. The ritual, which was performed at the Metropolitan Cathedral of San Luis Potosi, hoped to remove "deep-rooted evil" in Mexico.

Apart from the rise of savagery and violence in the nation, the church was also worried about a large number of Mexicans joining the Cult of Santa Muerte---a "belief", they say, led to the rising demand for an exorcism.

Nuestra Senora de la Santa Muerta (Our Lady of Holy Death) is a female deity worshipped in Mexican folk Catholicism. The cult has increased in prominence in the 21st century despite having a reputation as a death cult for criminals and drug traffickers.

The Cult of Santa Muerta has an estimated eight million followers, with more among migrants in Central America, Canada, and the United States.

Despite receiving condemnation from the Catholic Church, followers of the Bony Lady continue to worship her "appeal" which they say stems from her "non-judgemental nature" and her supposed ability to grant wishes. Many criminals flock to the deity wishing for immunity from arrests.

Santa Muerte has been known to make its believer's desires true---some claim the idol has helped their health stabilize. Worshippers often leave cigarettes, liquor, candy, and flowers as an offering.

The rising number of Holy Death devotees once caught the attention of Pope Francis who called the cult as a dangerous symbol of narco-culture. Mexican churches have also accused Santa Muerte followers of worshipping the devil.

The cult is considered as one of the fastest-growing cults in the world. Across Mexico, millions of Santa Muerte followers have started cutting ties with the Catholic Church. This movement has led many religious leaders to believe the devil is possessing people's souls and causing chaos in the country's streets.

The Catholic church deployed nine exorcists to Mexico in a bid to stamp down the growing number of "satanic rituals and witchcraft" overtaking the country. They believe the power received from Christ will help expel the roots of evil in the country and bring about positive repercussions to the nation marred by thousands of murders and violence cases.

The war between both faiths led to an overwhelming workload for the exorcists, as revealed by the Roman Catholic Archdiocese of Mexico. In light of the situation, the priest urged the general public to take the practice of exorcism to help banish the devil.

Want to watch a real-life exorcism? Play the video below:

© 2021 Latin Post. All rights reserved. Do not reproduce without permission.
Most Popular
Our Picks
In Other News
US News
Private Collector Returns Mayan Artifact to Guatemala After Plans of Auctioning It in 2019
US News
Day of the Dead or Dia De Muertos Parade in Mexico City Returns After Being Canceled in 2020 Due to COVID
World
Bank of Mexico Releases New 20-Peso Bill, Coins to Commemorate 200 Years of Country's Independence
US News
Mexico Creates National Guard Special Team to Recover Stolen Archaeological Pieces