Heroes Act 2.0 is the Democrat's reworked bill that cut the final cost of the stimulus package to get a deal with the lawmakers.

The Democrat-controlled House of Representatives passed the Heroes Act in May with a $3 trillion relief bill that would have extended the then $600 weekly unemployment benefits to Americans until 2021. It would also have issued the second round of stimulus checks, as per Fast Company.

The House bill was quickly shut down by Republicans who are currently in control of the Senate. The main reason for not approving the bill in the Senate came down to the $3 trillion costs that they said was too high. 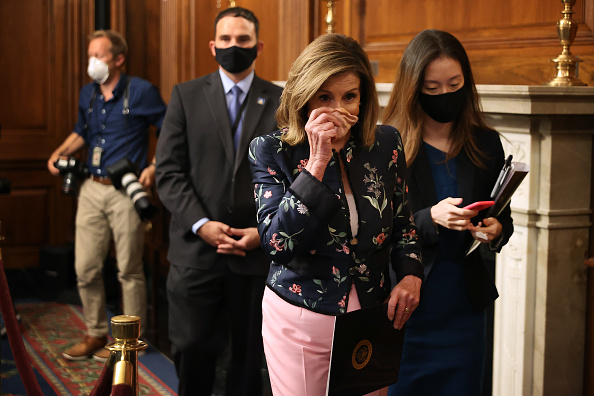 (Photo : Chip Somodevilla)
House Democrats Mark Two Months Since House Passage Of Heroes Act WASHINGTON, DC - JULY 15: Speaker of the House Nancy Pelosi (D-CA) puts her face mask back on at the conclusion of a news conference where she urged the Senate to pass the Heroes Act in the Rayburn Room at the U.S. Capitol July 15, 2020 in Washington, DC. In addition to demanding that the Senate pass additional financial aid legislation to blunt the effects of 40 million jobs lost due to the pandemic, Pelosi also demanded that President Donald Trump enact the Defense Production Act in order to produce more personal protective equipment that would help keep people safe from COVID-19.

However, in the spirit of compromise, the House Democrats unveiled Heroes Act 2.0 yesterday. The Act is a reworked bill that has the final cost of $2.2 trillion. Here are the inclusions of the Democrat's new stimulus package, as per the report from The Hill:

Heroes Act 2.0 is the Democrats' attempt to compromise with Republicans, who said that the first bill cost too much, House Democrats say.

By Thursday, the bill is expected to reach a vote and pass in the House. But it's unlikely that the Republican-controlled Senate will bring the Heroes Act 2.0 to a vote there if it passes the House. The second round of $1,200 stimulus checks have been long-resisted by the Republican lawmakers or even bringing back the $600 weekly unemployment benefits.

Meanwhile, NORML reported that House leadership's proposed stimulus package maintains provisions that will allow licensed cannabis businesses to legally and explicitly partner with banks or other financial institutions. The Heroes Act 2.0 includes the SAFE Banking Act (HR 1595) from its initial bill passed in May. The Secure and Fair Enforcement Banking Act makes legal pathways so that state-licensed marijuana businesses could legally engage with banks and other financial services.

Stimulus Checks Might Be Released Mid-October Once Pelosi, Mnuchin Reached a Deal

Second Stimulus Check: Here Are the Essential Things to Know About the Possible New Payment

© 2021 Latin Post. All rights reserved. Do not reproduce without permission.
Most Popular
Our Picks
In Other News
World
8 Brazilian Soldiers Who Shot Dead Musician, Bystander in a Hail of Bullets Convicted of Murder
US News
Mexican Drug Cartels Recruit Children as Young as 10 and Groom Them to Be Killers
US News
Fort Hood Soldier Found Dead Near Barracks; Army Officials Say Investigation Underway
US News
Hurricane Pamela Makes Landfall on West Coast Mexico With Threats of Flashfloods, Mudslides