Collins claimed that Pelosi did not "have mental fitness" to lead the House of Representatives.

"Speaker Nancy Pelosi's unwillingness to abide by the Constitution, combined with her recent actions, call into question her own mental fitness," Collins said in a statement to FOX News.

He urged the House to remove Pelosi from the line of succession, saying it was "critical."

Collins referenced Pelosi's visit to a shuttered hair salon during the pandemic as he questioned the speaker's "mental fitness."

The resolution stated that the Speaker was not wearing a mask when she visited the San Francisco salon. In what is now popularly known as "salon-gate", Pelosi then cast blame on the salon's owner, saying she was set up. 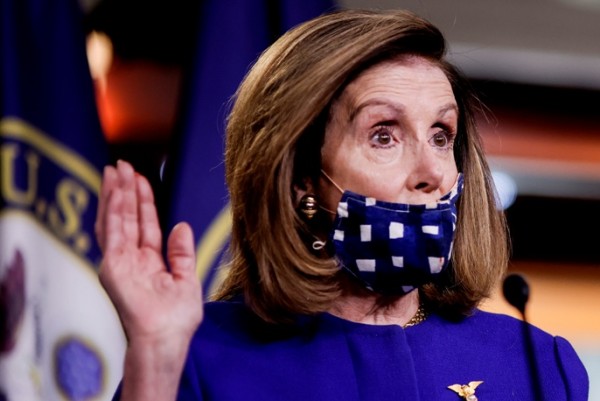 (Photo : REUTERS/Carlos Barria) U.S. House Speaker Nancy Pelosi announces her plans for Congress to create a "Commission on Presidential Capacity to Discharge the Powers and Duties of Office Act"

Collins believes that, throughout the Speaker's tenure, she has displayed signs of "decline in mental fitness."

Plans to remove Pelosi was first tweeted by Collins on Sunday.

According to The Sun, it's unclear of Collins is garnering support for his resolution and his comment on Pelosi's "mental fitness" from other House members.

So far, it seems the resolution is far from getting passed.

A spokesperson for Pelosi did not offer immediate comment on the resolution.

In the draft resolution, it was argued that Pelosi is unable to "adequately serve" as Speaker.

He accused Pelosi of wasting the House of Representatives' time on a partisan impeachment as well, said a Washington Times report.

It was announced just one week after Pelosi tried to use the 25th Amendment in ousting President Donald Trump. She claimed the president was in an "altered state" for his COVID-19 treatment.

Under the 25th Amendment, Congress, the cabinet and vice president can strip a president of their powers if they are declared unfit to lead.

But it shows a very slim chance of pushing forward.

Using this to oust a president will require a two-thirds vote from both houses. So even if the Democrat-controlled House passed it, it's unlikely to go through the GOP-held Senate.

The resolution also states that Pelosi was "pursuing baseless and fruitless investigations" against Trump and his administration.

But Pelosi argued that the move was not an attack on Trump. She also denied that the legislation was in any way linked to the election.

When Pelosi was asked if she though Trump met the threshold for the 25th Amendment, she said it was not a decision for her or the Congress, but all voters.

The resolution also pointed to Pelosi's role in overseeing the party-line vote to impeach a president was a first in the history of the country. The inquiry happened on October 31, 2019.

Collins also referenced an ABC interview in his resolution. It stated that Pelosi "exhibited bizarre behavior" during the interview.

Collins' resolution also stated that Pelosi "ripped up the State of the Union speech...before the American people" in February.

Pelosi did this during the 2020 State of the Union. She tore her printed copy of the speech after Trump delivered his remarks.

Pelosi Boasts About 'Progress' on Stimulus Deal, but Blames Republicans for Delays