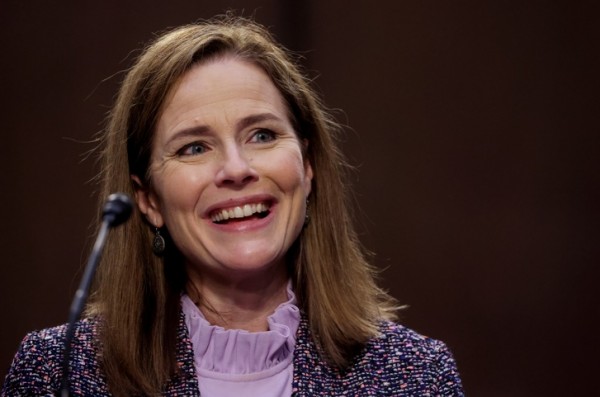 The fourth and final day of Amy Coney Barrett's confirmation hearing with the Senate Judiciary Committee concluded on Thursday.

Over the last four days, the confirmation hearings had opening remarks, Barrett's response to various issues, and outside witnesses.

Here are some key takeaways from Barrett's final confirmation hearing:

According to NBC affiliate KXAN, the first few hours of the final hearing were met with questions of legitimacy. Senators battled over the fast pace the confirmation was taking.

They were questioning its swiftness before the November 3 election. It was unlike the earlier hearings that were met with general civility, said a New York Times report.

Democrats started firing off accusations against Republicans. Their main argument was that the rush to fill a Supreme Court seat this close to the election was a power grab.

They believe the Republicans are after a 6-3 majority in the high court. This will give the GOP a chance to overrule the Affordable Care Act, limit abortion rights, and favor Trump in the elections.

Connecticut Democrat Sen. Richard Blumenthal said the purpose of the hearing was clear: to have a Supreme Court Justice that can "decide the election and to strike down the Affordable Care Act."

He made a failed attempt at delaying the confirmation until after the election.

Democrats also urged the Senate GOP to pause in their plans to rush it. They said the GOP is setting a dangerous new precedent. It could tear down the legitimacy of the Senate and the courts, they said.

John Cornyn said Democrats just "want a real fight," claiming they were only focused on their own gain. Graham also questioned the concerns of Democrats, saying it had nothing to do with Barrett's credentials.

While Barrett was not around for the Thursday hearing, witnesses testified for and against her.

One of the witnesses was from the American Bar Association (ABA). They called Barrett "brilliant," "forthright," and an "intellectual giant," said a FOX News report.

The ABA Standing Committee delivered an explanation for its "Well Qualified" rating for Barrett.

On the other hand, the hearing also featured Democrat witnesses who portrayed the 7th Circuit Judge as a threat to cause "real-world harm."

They believe Barrett poses a threat to health care, abortion, and voting rights.

Laura Wolk, one of Barrett's students at Notre Dame Law School, recalled how assistive Barrett has been in mentoring her. She was the first blind woman to become a clerk for the Supreme Court.

Wolk praised Barrett not only for her intellect but also for her "ability to treat everyone as an equal deserving of complete respect."

After receiving assistance from Barrett amid her struggles with technology, Wolk is still left in the dark about how Barrett advocated on her behalf.

She believed it was a sign of the judge's humility. She also considered Barrett's role in her life as a stepping stone to her "impossible dream" of clerking for the Supreme Court.

Meanwhile, the Senate Judiciary Committee is reportedly set to vote on Barrett's nomination next week.

To read more about Barrett's confirmation hearings, check these out: