Latinas Still Have the Highest Unemployment Rate Amid Coronavirus Pandemic

Latinas in the United States experienced most job losses this year compared to other Americans who have been affected by the coronavirus.

USA Today reported that the Latin unemployment rate hit 20.2 percent in April, wherein one in five Latinas was jobless. Latina unemployment rose monthly from August to September while it dropped for everyone else and is now at 11 percent. 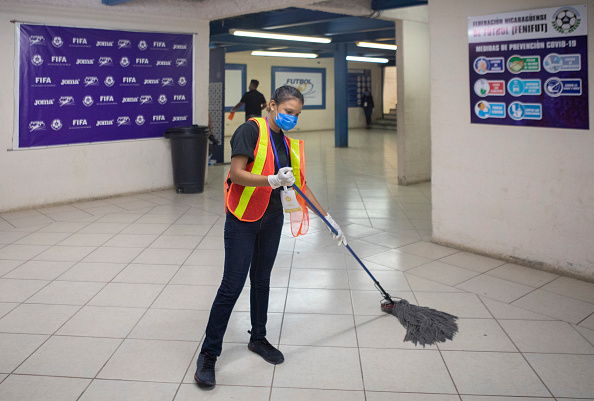 (Photo : Inti Ocon/Getty Images)
Managua FC v Real Esteli - Nicaraguan Liga Primera MANAGUA, NICARAGUA - MAY 9, 2020: A worker of Estadio Nacional disinfects the floor prior the final match between Managua FC and Real Estelí as part of Nicaraguan Liga Primera at Estadio Nacional on May 9, 2020 in Managua, Nicaragua. Sports continue in Nicaragua despite most countries have stopped all public gatherings due to the spread of COVID-19.

The 19th, a nonpartisan and nonprofit newsroom, also published the article that found a correlation between the rising interest in voting in the upcoming election and the increase in unemployment among Latinas this year, as per Hiplatina.

According to Equis Research, Latinas usually go to the polls at 14 to 20 percent lower rates compared to White, Black, or non-Latino women.

The common reason why Latinas have historically inactive voters, as per the publication, is the fear that they would not understand the process fully due to language barriers or because of the belief that their vote doesn't make any difference.

A poll by UnidosUS found the issues around pay cuts or job loss this year made over 60 percent of those polled likely to vote in the November election.

The publication also found that nearly 60 percent in the three mentioned states said they couldn't make ends meet without unemployment benefits. However, between 45-52 percent did not apply for unemployment insurance benefits, with most believe that they are not eligible or qualified.

Latinos start about one in four new businesses in the U.S. wherein Latinas own about 35 percent of them, as per a report by the Small Business Administration.

A UnidosUS principal, Orson Aguilar, told The 19th that Latinas would have been disproportionately affected by more relief.

Aguilar noted that Latinas have been growing their businesses at record levels and need extra Paycheck Protection Program loan.

According to the Economic Policy Institute (EPI), the fields that suffered the most massive job losses from Feb. to May this year are retail, hospitality, and "other services." Almost half of all Latina workers are employed in these fields.

The workforce in hospitality makes up almost 15 percent Latina, the largest of any group. They also have significantly less access to have remote work and paid sick leave.

Around 32 million Latinos can vote this year -- the largest racial or ethnic minority in a presidential election for the first time, as per Pew Research Center. Many Latinas, especially older ones, are planning to vote even though they are affected by the pandemic.

Norma Flores, 54, told The 19th: "It has made me think a lot that it's important to vote, and especially women - we have to count."

After immigrating from Mexico, Norma worked as a server at Fiesta Henderson Hotel and Casino outside Las Vegas for about 20 years, and she was laid off only last August.