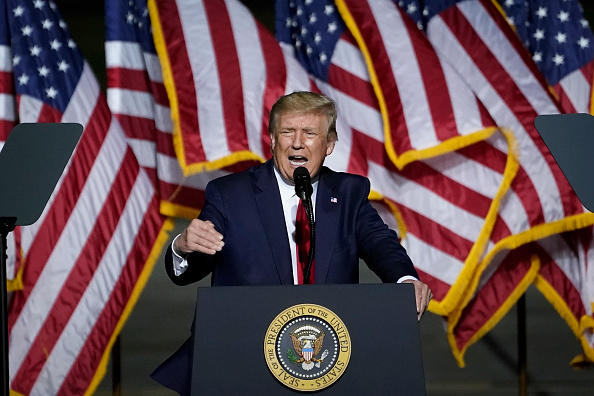 The Trump campaign and the Republican National Committee filed a lawsuit in Arizona on Saturday saying in-person ballots were improperly rejected in Maricopa County.

The lawsuit came to Arizona's most populous county just hours after the election was called in favor of Democrat Joe Biden, said Reuters.

Trump's team filed the lawsuit to Arizona's Superior Court, alleging that numerous voters were alerted of a "facial irregularity" in their ballot, which was described as an "overvote," FOX News reported.

Trump's campaign suggested that the alerts were "induced by poll workers to override the tabulator's rejection of the ballot in the good faith belief that their vote would be duly registered and tabulated."

"In actuality, overriding the electronic tabulator's alert automatically disqualifies the putative 'overvotes' without without additional review or adjudication," the suit claimed.

It added that as per Arizona law, overvotes are required to be subjected to further review.

The goal for the said lawsuit is to conduct a manual inspection of the said "overvoted" ballots that were cast in-person.

It's demanding the same kind of treatment the election officials gave mail-in and dropped off ballots that were considered "overvotes."

Trump's campaign reiterated that when a polling machine detects an error in a ballot, poll workers have to inform the in-person voter so they are given the opportunity to correct the issue.

It was something that the suit alleges was never done, reported The Hill.

Instead, voters were given a green button that would override their error, so the machine disregarded the voter's choice.

Major television networks have already declared Biden the winner of this year's election.

But the lawsuit suggested that the Arizona votes could prove "determinative" in the outcome of the race.

Trump did not concede defeat to Biden yet and vowed to start more legal battles "to ensure election laws are fully upheld and the rightful winner is seated."

The Arizona lawsuit is not the first one Trump's campaign has filed over the past few days.

Others were also mounted in several battleground states like Michigan, Wisconsin and Nevada.

Biden currently holds a narrow lead over the president in Arizona, at only 0.65% or over 21,000 votes.

The lawsuit contained some evidence, including sworn statements from two individuals who were notified of the "overvote."

There were also declarations from some poll observers.  Submission of additional declarations was also urged by the campaign through DontTouchTheGreenButton.com.

If these legal challenges don't open up a path for a second term, Trump will graciously concede and commit to a peaceful transfer of power, some sources told FOX.

An Arizona official chose to reject the campaign's lawsuit, saying it was just a "stalling tactic" to delay the official counting of ballots.

Arizona Secretary of State Katie Hobbs in a statement said the Trump campaign was "grasping at straws."

Meanwhile, the Maricopa County Elections Department declined to comment on the matter.