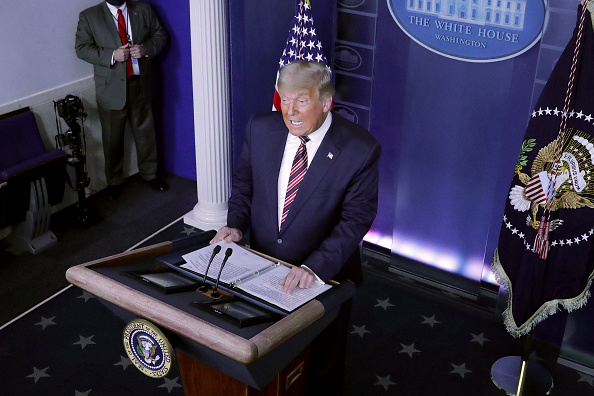 President Donald Trump's election lawsuits were quickly dismissed in Georgia and Michigan on Thursday, undercutting legal action aimed at questioning the integrity of the voting process.

The Washington Post noted that amid allegations of fraud, the Trump campaign did not offer any evidence of irregularities in their lawsuits.

Rulings in Michigan and Georgia came as Democrat Joe Biden drew closer to the 270 electoral votes needed for a White House seat.

In Georgia, a judge in Chatham County denied the Trump lawsuit to disqualify about 50 ballots that allegedly arrived after the 7 p.m. cutoff on Tuesday.

A Michigan Court of Claims judge, on the other hand, said she would deny the request for an emergency halt in vote counts in the state.

There was no evidence of late ballot arrivals in the Georgia case, and the Michigan judge said the claim did not make a lot of sense since counting was more or less finished in the state, reported USA Today.

Biden was already ahead by 150,000 votes in Michigan. National news organizations have already recognized him as the winner of the state.

The Trump campaign announced further intentions to file a lawsuit in other states like Nevada, where Biden is also leading.

As he spoke at the White House briefing room Thursday, Trump claimed that he was unfairly being deprived of a second term, reported Chicago Tribune.

"We think there'll be a lot of litigation because we can't have an election stolen like this," Trump said.

Longtime GOP elections lawyer Ben Ginsberg told CNN that with just a few days after the election, it's improbable for Trump to admit defeat yet.

"So they throw a lot of Hail Mary lawsuits at the wall and hope something sticks," he continued.

Ginsberg said if he could describe how Trump's campaign is handling the current projections, it won't be "optimistic" but instead "scrambling."

Franita Tolson, a law professor at USC Gould School of Law, also thinks the lawsuits are "longshot" and unlikely to succeed, said CNN.

In particular, the Georgia ballot that alleged a poll worker mixing unprocessed and processed absentee ballots would only affect a handful of votes, Tolson said.

In the end, the lawsuit's likely goal isn't to make big leaps in the electoral college votes but in the short term to change the narrative.

She believed the stories on a potential Biden win would shift into a conversation on election mismanagement and fraud.

Biden's campaign lawyer said earlier Thursday that the lawsuits were basically meritless. He also said the legal actions are part of a more political strategy than a legal one.

"It is to create an opportunity for them to message falsely about what's taking place in the electoral process," lawyer Bob Bauer said.

Other than the rejected Michigan and Georgia lawsuits, the Trump team also has other cases to fight in other states.

In Pennsylvania, Trump won an appellate ruling to get observers closer to the poll workers who process mail-in ballots in the city of Philadelphia.

The order did not affect ballot-counting elsewhere, as election officials are dealing with an unprecedented amount of mail-in ballots.

The Chicago Tribune noted that to overturn current projections, Trump may have to get lawsuits out for at least two more states.

It's a very different situation from the 2000 elections where Florida's electoral votes were being contested in the Supreme Court. The 2000 case also involved a recount instead of calling for a halt in counting.

© 2022 Latin Post. All rights reserved. Do not reproduce without permission.
Most Popular
Our Picks
In Other News
US News
Son of Pablo Escobar, Leader of Colombia's Medellin Cartel, Joins Celebrities Available to Send Special Messages
US News
Texas Jail Escapee Arrested While Trying to Flee to Mexico on Foot
US News
Jalisco Cartel Official 'Don Carlos' Who Receives Direct Orders From Boss 'El Mencho' Arrested in Mexico
US News
Pres. Joe Biden Will Face Impeachment in November, Steve Bannon Says