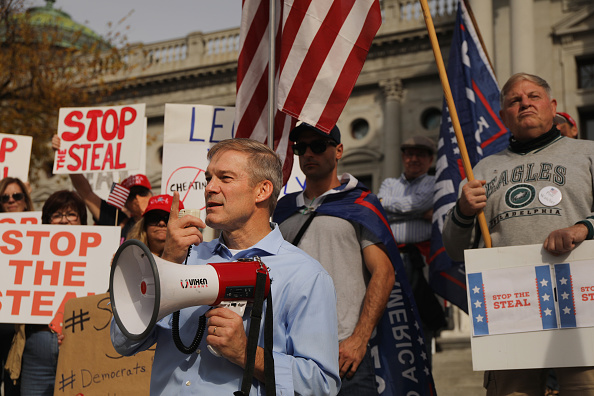 (Photo : Spencer Platt/Getty Images) Representative Jim Jordan stands with dozens of people calling for stopping the vote count in Pennsylvania due to alleged fraud against President Donald Trump gather on the steps of the State Capital on November 05, 2020 in Harrisburg, Pennsylvania.

Top Republicans from the House Judiciary and Oversight Committees demanded a congressional investigation on the 2020 presidential election.

Breitbart quoted Jordan in the report saying, "So, Ranking Member [of the House Oversight Committee] Comer today - first call for an investigation."

"Why don't you guys investigate? The committees aren't even meeting this week," he questioned. "Why not look into this? So, that, to me, is the fundamental question."

Jordan said the Congress has to look into alleged "errors and misconduct" that have resulted in a slew of lawsuits surrounding the 2020 presidential race. He asked Congress to hold hearings on the matter "immediately."

In the letter, the Republicans urged Nadler and Maloney to "examine the integrity of the 2020 election" as claims of "irregularities" and "improprieties" that arose.

They told the Democratic House members that, given their role as leaders of their political party, Nadler and Maloney "owe it to all Americans" to investigate the possible misconducts.

Jordan and Comer also pointed out that the Democrats spent years questioning the legitimacy of the past election.

They were referring to the years-long congressional probe into whether President Donald Trump's campaign colluded with the Russian government to affect the results of the 2016 election.

Jordan and Comer, in their letter, also pointed to concerns on "dangerous initiatives" that could affect election-related errors and crimes because of last-minute changes to election laws and protocols.

They added that the changes could affect the integrity of the electoral process. According to them, the Democrats "ignored" the report and said most of their concerns came true.

The call for a congressional investigation on the 2020 election came as the Trump campaign filed one lawsuit after another in some key battleground states.

Recount requests have also been filed in hopes of closing the gap between Trump and Democrat Joe Biden.

Even after the election was called for Biden by several media organizations, based on projections, Trump has not yet backed down. He has not given his concession despite projections showing that more than 270 electoral votes will be coming to Biden.

Instead, Trump signaled that Biden probably "won" the election but it was "rigged" to go against his campaign. He continues to claim widespread voter fraud in the latest election.

Some of his filings so far included a partial recount request in Wisconsin. His campaign claimed there were illegally-altered absentee ballots and illegal advice given by government officials.

These alleged illegal activities led to the circumvention of the state's voter ID laws. The Trump campaign spent $3 million for the petition on the state's largely Democratic counties: Milwaukee and Dane.