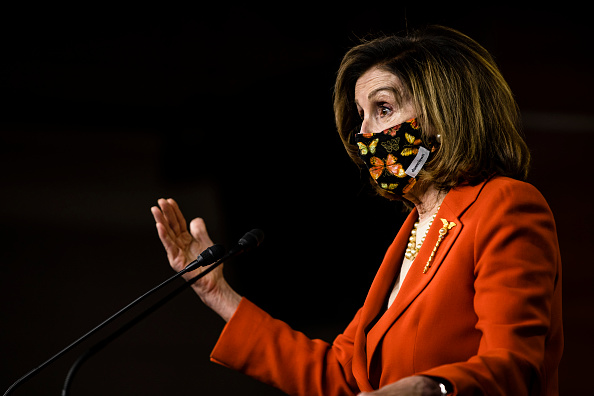 (Photo : Samuel Corum/Getty Images) Speaker of the House Nancy Pelosi (D-CA) speaks during a press conference at the U.S. Capitol on January 15, 2021 in Washington, DC.

The 22-year-old woman allegedly told a former "romantic partner" about her plans with Pelosi's stolen computer, the document stated.

Riley June Williams was charged with disorderly conduct on Capitol grounds with the intent to disturb a session of Congress and other charges after her ex tipped the authorities about her activity.

The affidavit also details Williams' apparent plan with Pelosi's stolen laptop and how it would be conveyed to a Russian contact, who would then contact U.S. officials, reported The Verge.

After she surrendered to authorities in her home in Pennsylvania, Williams was arrested, a law enforcement official confirmed on late Monday.

Related story: 'Traitors Get Shot': Texas Man in Capitol Riot Threatens to Shoot Children If They Turn Him In

Riley June Williams was first identified by U.K. media ITV News over the weekend, and authorities had her identification matched with her driver's license photo through the state's Department of Transportation. Her parents were also interviewed in person.

The Federal Bureau of Investigation (FBI) is also looking into laptop theft claims, but there appears to be no indication of any case happening in the speaker's office. In light of that, she was not charged for that allegation, reported New York Post.

The ex, who was described by the FBI as W1 (witness one), called the authorities and said Williams "intended to send the computer device to a friend in Russia, who then planned to sell the device to SVR, Russia's foreign intelligence service."

However, the computer transfer to Russia "fell through for unknown reasons," and Riley June Williams either still has the laptop with her or destroyed it, the document stated.

Special Agent Jonathan Lund reiterated that the device and the circumstances related to Williams' activity at the time of the riot are still under investigation.

Pelosi's deputy chief of staff, Drew Hammill, confirmed on Twitter that the laptop was stolen from a conference room during the January 6 siege, and it was "only used for presentations."

Riley June Williams was notably seen on public videos of the attack as she directed rioters to the general direction on Pelosi's office.

She was heard yelling "upstairs, upstairs, upstairs" to other rioters and was also seen pushing them in towards the speaker's office. This falls consistent with claims that she had intentions to ransack the office.

An ITV News report described Riley June Williams as "disciplined, focused, with a sense of urgency, directing people up a staircase."

Device theft in government is a significant concern for federal I.T. workers, especially in the wake of the Capitol riot that broke many security procedures in Congress, said a report from NBC News.

Getting any device stolen or tampered with after the attack would be a "nightmare scenario" for these workers.

"I don't think I'd sleep well until the networks were rebuilt from scratch and every computer wiped and the internals visually inspected before being put back into service," a former House I.T. official said in a tweet.

Another one arrested in connection to the Capitol attack was New Mexico county official Couy Griffin, reported NBC Washington.

He was identified as a founder of the group Cowboys for Trump, who vowed to go back to the Capitol to place a flag on Pelosi's desk.

The Otero County Commissioner was arrested on charges of illegally entering the U.S. Capitol. A video on his personal Facebook page showed him in the Capitol's restricted areas, an affidavit said.