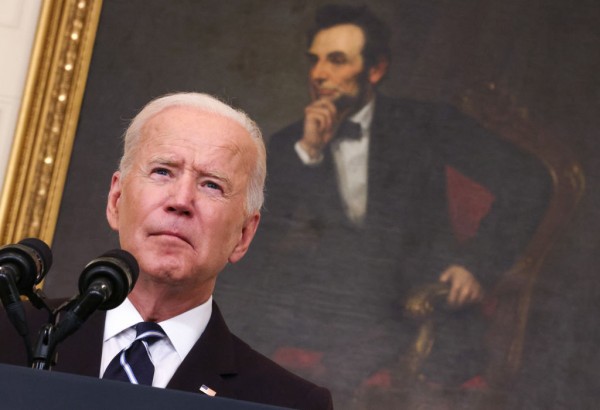 Governors and Republicans expressed their opposition to the new vaccine mandates announced by President Joe Biden on Thursday, an all-out effort to increase the inoculation rate and curtail the surging delta variant across the U.S.

Biden announced the new vaccine requirements during a speech on White House, as a part of the new action plan to address the latest surge in coronavirus cases and the declining pace of COVID-19 vaccination.

READ NEXT: Biden Administration Asks More Than $30B to Congress for Refugees from Afghanistan, Natural Disasters

As President Joe Biden announced the new vaccine mandate that will affect millions of American workers, Republicans expressed their opposition.

Republican Governor Kristi Noem from South Dakota called the mandates an "example of federal intrusion." The South Dakota governor touted to file a lawsuit, once the president officially files the rule.

My legal team is standing by ready to file our lawsuit the minute @joebiden files his unconstitutional rule. This gross example of federal intrusion will not stand.

Governor Tate Reeves called Biden's move "terrifying," adding that the president has no authority to require Americans for vaccination because they were employed in private businesses. Governor Doug Ducey also expressed his thoughts on the vaccine mandates calling it a wrong dictatorial approach. Ducey furthered that the vaccine should be a choice.

This dictatorial approach is wrong, un-American and will do far more harm than good. How many workers will be displaced? How many kids kept out of classrooms? How many businesses fined? The vaccine is and should be a choice. We must and will push back. 2/2

Apart from the governors, other Republicans also expressed their opposition to the vaccine mandate.

In a statement, Representative Greg Murphy, who is also a member of the GOP Doctors Caucus, said that the decision to whether or not to take the vaccine "is one that should be made between a patient and a doctor," Fox News reported. Murphy also underscored that the government has no authority to dictate a "patient-doctor" healthcare decision.

Meanwhile, Representative Andy Biggs stressed that he would introduce legislation against the said vaccine mandates, calling the movement from the Biden administration an assault on the "freedom and liberty" of Americans.

I will be introducing legislation to block this egregious assault on Americans' freedom and liberty.

We must fight against these attempts to force vaccine mandates on the American people. https://t.co/ShTT8JCPTt #FoxNews

Apart from the vaccine mandates that will affect the workers in private sectors, President Biden also announced that he will sign an executive order that will require workers from the executive branch and contractors that do business with the federal government to get vaccinated.

The difference in the order is that the said demographic will have no option for testing. However, White House Press Secretary Jen Psaki highlighted that the order would include exceptions for workers seeking religious or medical exemptions for vaccination.

Federal workers will be given 75 days to be fully vaccinated and workers who will not comply will be referred to their agency's human resource counseling, discipline, or potential termination.

READ NEXT: Pres. Joe Biden Flip-Flops on When Life Begins in Abortion, Says Life Does Not Begin at Conception Contradicting Past Claims