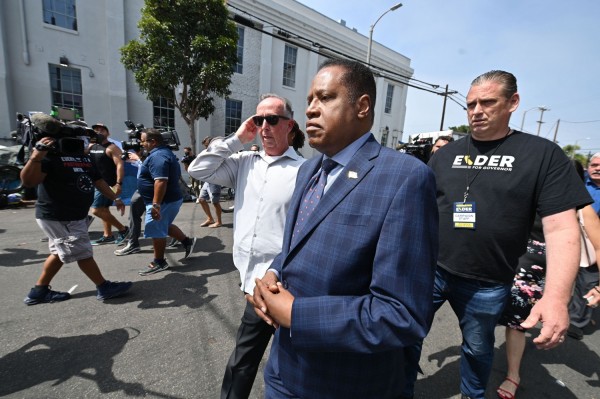 Sheriff Alex Villanueva from the Los Angeles County called the egg attack Larry Elder experienced a "hate crime" on Thursday, as he called on the "woke politicians" over the incident.

It can be recalled that a White woman wearing a gorilla mask and pink wig threw an egg at Elder, while he was in the streets, and punched some of the governor hopeful's security staffers.

In a Twitter post, Villanueva asked the public how the egg attack on the gubernatorial candidate was not a hate crime.

QUESTION: How is this not a hate crime?

ANSWER: Because “woke privilege” means a white woman can wear a gorilla mask and attack a black man without fear of being called a racist.

READ NEXT: California Recall: VP Kamala Harris Rallies With Gavin Newsom; Larry Elder Cuts Tour After an Egg was Thrown at Him

The sheriff took to Twitter to express his thoughts on the Wednesday incident that prompted the cancellation of Elder's campaign in the Venice neighborhood of Los Angeles.

"ANSWER: Because "woke privilege" means a White woman can wear a gorilla mask and attack a Black man without fear of being called racist," Villanueva said in his Twitter post. The Los Angeles Sheriff also wondered why the normally "outraged" politicians are not speaking up in Elder's defense.

As Villanueva called on the politicians, former Democratic state Senator Gloria Romero thanked the sheriff for doing so. "Thank you, Sheriff, for calling it out," Romero said. The former senator then mentioned several California officials including Governor Gavin Newsom. Vice President Kamala Harris was also tagged by Romero in her statement, as well as Democratic groups from the state.

Romero then urged the officials to decry the racism against Larry Elder.

Despite the dubbed racist attack against Larry Elder on Wednesday, the Los Angeles Police Department (LAPD) did not mention whether they will investigate the said incident, The Washington Examiner reported.

However, Sheriff Villanueva pointed out that the robbery-homicide unit of the LAPD will investigate the case. Villanueva emphasized that the White woman, wearing a gorilla mask and pink wig, might be one of the 20,000 felons released by the California governor.

"People need to be held accountable on both sides of the aisle," the Los Angeles sheriff said in an interview. Villanueva then blasted Newsom, asking why the California governor did not call out the "reprehensible" behavior of Larry Elder's attacker on Wednesday.

Larry Elder Calls out Liberal Silence on the Egg Attack

As a probe for Elder's assault was underway, the governor hopeful on Thursday called on the silence of the Liberals on the egg attack he experienced.

Elder said in a phone interview that it was clear to him that if he was a liberal and the same incident happened, "the left would be screaming about systematic racism.

When asked whether the egg attack was racist, Elder said that he does not know either the attack was racially motivated or if the woman was mentally ill and might need treatment. The governor hopeful further noted that homeless advocates in the neighborhood told him that they do not know the attacker and the woman might be an outside agitator.

"Maybe it was an idiot... Maybe it was just someone who doesn't like Larry Elder," the governor hopeful said about the attacker.