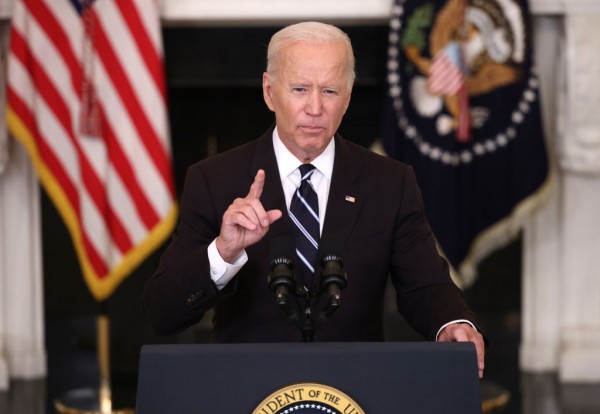 President Joe Biden on Thursday denounced Florida and Texas governors, Ron DeSantis and Greg Abbott, over their pandemic response on their respective states.

President Biden's criticism against the governors happened while he was announcing the new vaccine mandates that will boost the inoculation rate across the United States.

As Biden criticized the governors along with other Republican officials, the president threatened to use his power to remove the officials "out of the way" if they will not help to beat the pandemic.

"If they'll not help, if these governors won't help us beat pandemic, I'll use my power as president to get them out of the way," Biden said.

The president pointed out that the said officials were working to "undermine" their response against the coronavirus pandemic.

It can be recalled the DeSantis ordered the face masks in Florida schools to remain optional. DeSantis also filed for an emergency appeal following the ruling of a circuit court judge allowing schools to impose their face mask mandates.

Meanwhile, Texas Governor Abbott issued an executive order that prevented the schools from imposing face mask mandates, while allowing individuals the liberty to choose whether they want to wear the face-covering or not.

President Joe Biden said that local school officials were trying to keep the children safe against the virus, "while their governor picks a fight with them and even threatens their salaries or their jobs."

In early August, Governor DeSantis announced that Florida's Board of Education can withhold the salaries of school board members as well as superintendents who will not abide by his ban on the facial coverings.

On Thursday, Biden promised the educators whose salaries were withheld that the federal government will restore their earnings.

"We will have that pay restored by the federal government, 100 percent," the president pledged, adding that he got their backs.

"I do not believe that people should lose their jobs over this issue, and we will fight that," the Florida governor said during a press conference, adding that he does not believe that the vaccine mandate will help in getting more people vaccinated against the notorious disease.

DeSantis further noted that "forcing and coercing people" to take the vaccine is not the right decision. The governor also mentioned that "a lot of activity in the courts" would happen once the Biden administration enforced the mandates through executive action.

Meanwhile, Texas Governor Greg Abbott took to Twitter to criticize President Joe Biden's vaccine mandates, claiming that the movement was an "assault on private business." The governor then noted that he issued an executive order that would protect the right of the Texans to choose whether they want or not to get the COVIC-19 vaccine.

Biden’s vaccine mandate is an assault on private businesses.

I issued an Executive Order protecting Texans’ right to choose whether they get the COVID vaccine & added it to the special session agenda.

Texas is already working to halt this power grab.https://t.co/TwoQMhDxoM