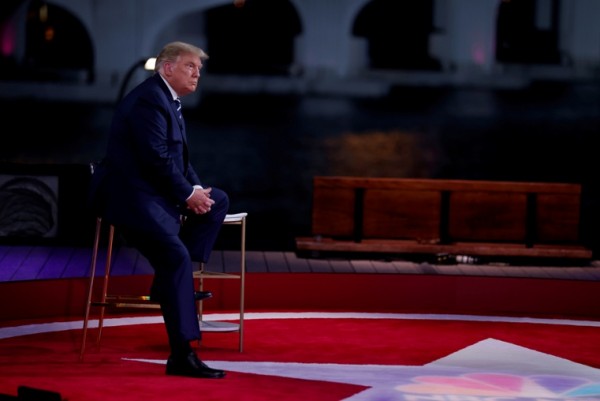 President Donald Trump insisted that he is going to implement "better healthcare" than Obamacare during this NBC town hall Thursday.

Trump made it clear that he was against the Obamacare, also known as the Affordable Care Act (ACA), attacking it over and over again through the years.

He pledged to overturn it in 2016 and is currently seeking to dismantle it in the Supreme Court, noted The Guardian.

A voter, concerned about the high prices of healthcare, asked Trump what he was planning to do once the Obamacare is repealed.

Trump then explained that the statue was simply "not good" and "basically is never going to be great."

"We'd like to terminate it and we want a much less expensive healthcare that's a much better healthcare and that's where we're aiming," he said.

Through the years, the president has promised affordable healthcare but has not outlined a specific plan yet. It seemed like during the town hall, he also refused to give any specific details on his plans, noted Associated Press.

But throughout the event, he still insisted that his administration "would like to replace it with something that's much less expensive and much better."

"Under all circumstances, we are going to protect...people with preexisting conditions," he said during the town hall.

Trump has been doing steps in this direction. In late September, he outlined a health care vision that provided protection for people with preexisting conditions.

According to CNN, if Obamacare gets wiped away, there could be millions of Americans negatively affected. This is not limited to some 20 million Americans who have coverage on the ACA and Medicaid expansion to low-income adults.

Before diving into all Americans' healthcare plans, the Trump town hall started with questions on the president's COVID-19 diagnosis first.

Moderator Savannah Guthrie kicked off the event by also asking about the president's treatment and testing. While discussing his COVID battle, Trump said he "didn't feel good" when he had the virus.

When Guthrie asked if the doctors told him about seeing pneumonia in his lungs, he said his doctors did not tell him, reported NBC News. He added that the doctors found his lungs "a little bit different, a little bit perhaps infected."

After getting pressed as to what "infected" meant, Trump said he simply didn't do "too much asking" because he felt good despite the illness.  "I didn't have much of a problem with the lungs, I did have a little bit of a temperature," he noted.

Trump said he was not sure if he was tested for the virus on the day of the presidential debate. His best guess was he "possibly" did, adding that he gets "tested all the time" and that he doesn't remember.

Trump Lays Out Health Care Vision, Signs EOs to Focus on These 2 Issues