The U.S. border authorities expelled migrant children from other nations into the neighboring country.

A diplomatic agreement with Mexico has been violated by the U.S. border authorities by expelling migrant children from other countries into the neighboring country, as per The New York Times report.

The expulsions wherein direct conflict with a diplomatic agreement between U.S. and Mexico. The Mexican government agreed to help bring back Mexican children into the country if they attempt to cross the border into the U.S. 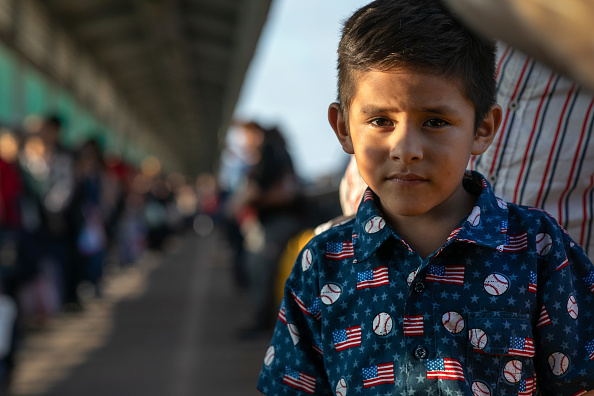 (Photo : John Moore/Getty Images)
Asylum Seekers Fill Tent Camps As Part Of U.S. “Remain In Mexico” Policy MATAMOROS, MEXICO - DECEMBER 09: Honduran asylum seeker, Christopher, 6, stands with his father on the international bridge from Mexico to the United States on December 09, 2019 in the border town of Matamoros, Mexico. They were waiting to be taken by U.S. officials to an immigration court hearing in Brownsville, Texas. (Photo by John Moore/Getty Images)

According to Independent, children from countries other than Mexico are supposed to be put on flights back to their home nations under the diplomatic agreement. The flights are operated by Immigration and Customs Enforcement (ICE).

Children from countries such as Honduras, Guatemala, and El Salvador put them at risk by sending them into a nation with no family or connections.

Most of the children have been put into the care of child welfare authorities in Mexico, the Times reported. The officers oversee shelters organized by private and religious groups.

In the past eight months, at least 200 migrant children have been expelled to Mexico from the U.S., even if they are not citizens of the country. The U.S. Border Patrol's assistant chief, Eduardo Sanchez's email, has been obtained by the Times. It confirmed that expulsions had taken place.

The acting commissioner of the Customs and Border Protection agency, Mark Morgan, said that if migrant children from countries other than Mexico were expelled to the country, it is a violation of the diplomatic agreement.

A week after it was widely reported that the federal government could not locate parents of the 545 children separated from the rest of their families after they crossed the U.S. border, the news came.

Parents of the migrant children were unable to be found by lawyers after most families were deported back to Central America, as per the American Civil Liberties Union (ACLU).

ACLU's court filing revealed that they had made contact with parents of 550 children only. According to NBC News, in 2017, there have been 1,000 families separated at the border.

On Friday morning, Tim Murtaugh, Trump campaign spokesman, claims that some migrant families were separated at the U.S.border by the administration because the parents do not want their children back.

Murtaugh said when speaking on CNN's New Day: "It's a regrettable situation, certainly." However, Murtaugh claims the problem is more complicated for the Department of Homeland Security (DHS).

Trump cracks down on cages for children

During the final debate of the presidential nominees, President Donald Trump and Democratic challenger Joe Biden, the two clashed over the reports, according to Independent.

Trump criticized the Obama administration for building detention centers for undocumented migrants to the U.S. he then asked the Democratic candidate, "Who made the cages?"